Talking about modernising the Army's inventory, Rawat said that the focus is on the Artillery weapon system. 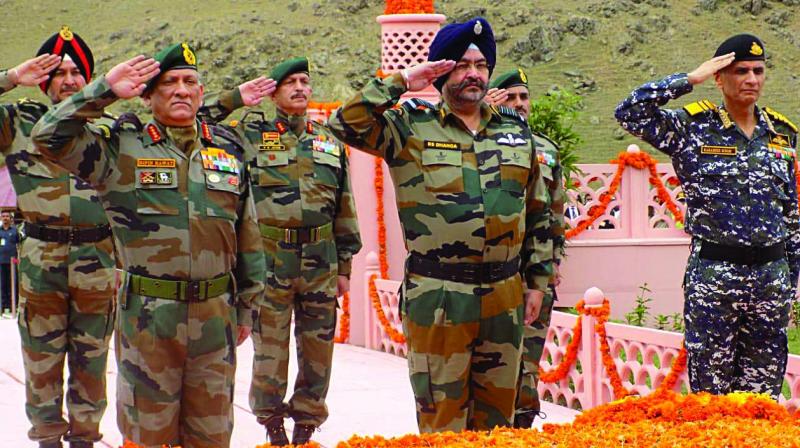 Srinagar: Army Chief Gen. Bipin Rawat on Friday warned Pakistan of a “bloodier nose” if it chooses to go into another Kargil-like “misadventure” with India.

“My message is: don’t do it. Kargil was a misadventure. Misadventures are normally not repeated. You’ll get a bloodier nose next time,” he said, when asked at a press conference at Drass what message he would like to send to Pakistan on “Kargil Vijay Diwas”. July 26 is celebrated as “Kargil Vijay Diwas” every year to mark India’s victory over Pakistan in the 1999 mini-war in the Kargil region of Jammu and Kashmir.

Recalling the circumstances in which the Indian Army drove out enemy forces and reclaimed the Kargil heights, Gen. Rawat said: “The Indian soldier fought in very difficult and challenging circumstances. Yet he didn’t fail in his duty. He ensured that the task given to him was completed because he knew that we have to live by the reputation of the Indian Army.”

He said that the Kargil was the saga of “courage, valour and sacrifice” and the Kargil Vijay Diwas was the day to pay homage to those soldiers who laid down their lives, to those who were wounded in the battle and those who fought the war and supported the units and formations that were actively involved in the combat”. He added: “We’ve gathered here to pay tribute to those courageous soldiers who fought valiantly. It is a historic event.”

Replying to questions, Gen. Rawat said that the Army was modernising its inventory and the focus was on the artillery weapons systems. He said: “We’re looking at modernising our inventory. Our focus is on artillery weapon system. We will get the howitzers by 2020, K-9 Vajra is being manufactured in the country now and two Bofors-like guns are also being manufactured locally.”

Talking about operational challenges before the Army, he said: “My main concern is that my soldier must get empowered and continue to be empowered. It is the man behind the gun who matters. If you have to get victory it is the man that will matter.”

Elaborating, he said it has to ensured that the soldier is well trained and well equipped all the time and provided with the gear with which he can execute his task. “When I say that I mean equipping him with weaponry and ammunition and making such devices available to him with the help of which he can carry out surveillance and other tasks. Our soldier has very little demand. Our soldier is capable of fighting even when there is no food available to him. The only thing he needs is good weapons, the ammunition and the devices which can help him in locating and targeting the enemy.”

Speaking on the situation along the Line of Actual Control (LAC), he said “peace” and “tranquillity” prevails along the border with China and the situation was under control.

Asked about Army’s view on Pakistan PM Imran Khan seeking mediation on Kashmir from the US President, Gen. Rawat said: “There is a difference between talk and action. You shouldn’t only believe in talk when you see action happening on ground.”

When a reporter pointed out that Imran Khan had been accompanied by the chiefs of the Pakistan Army and the ISI on his recent US visit, and it appeared that Islamabad wants to acquire weaponry from the US in the name of fighting divisive forces in Afghanistan but may use those weapons only against India, the Army chief quipped: “The answer lies in your question itself. I agree with you.”

He also said: “You are aware of the situation Pakistan is going through. Who issues diktats and directions there is known to all. At the moment, their economy is in shambles. Therefore, they will be ready to do anything through which they can get the money, and once they get that money they will repeat what they have been doing for years.”

Asked what had changed after the Kargil incursions, the February 14, 2019 terror attack in Pulwama and the IAF strikes in Balakot, and how he sees the recent Al Qaeda threats against India, Gen. Rawat said: “These are desperate attempts when militancy is gradually dying out. Every attempt is being made by them to ensure the K-issue is kept alive because now they have been singled out as a state that has been sponsoring terrorism on Indian soil. The world at large knows terrorists are being trained in Pakistan. There are training camps. They are providing not just moral support but also final support and weaponry to terrorists. They are infiltrating people from across the border to join hands with the local youth to up the ante of terrorism.”

He added: “Radicalisation and social media are being extensively used to fuel trouble in Jammu and Kashmir. So I would say these are desperate attempts to keep the K-issue alive because they know that they have been singled out and that this issue may no longer be an issue before the international community.”