Amit Shah called Yediyurappa and asked him to stake claim, following which the veteran leader rushed to Raj Bhavan to meet the governor. 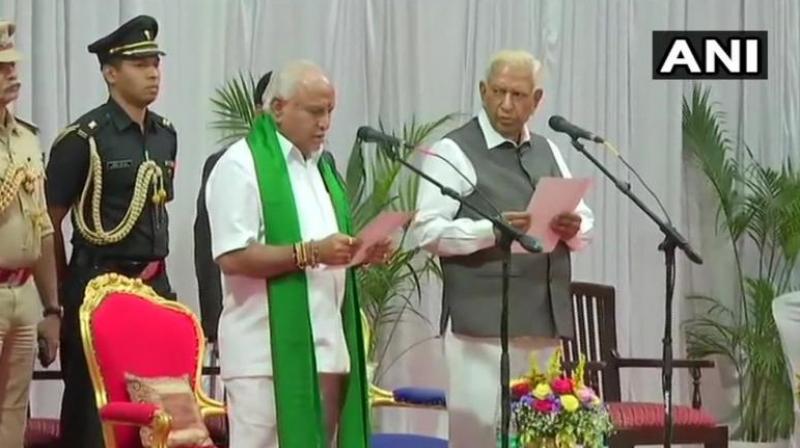 Karnataka governor Vajubhai Vala administers the oath of office to B.S. Yediyurappa as Karnataka chief minister during the swearing-in ceremony at Raj Bhavan in Bengaluru on Friday. (Photo: AFP)

Bengaluru: The BJP, which has been waiting on the sidelines for the past six years, regained its citadel in South India a year after the Assembly polls in May 2018, with the party’s state chief B.S. Yediyurappa sworn in as chief minister for the fourth time by governor Vajubhai Vala at Raj Bhavan here on Friday evening.

Shortly after taking the oath, Mr Yediyurappa — as he will be known from now on after changing his name from the earlier “Yeddyurappa” — said he would move a motion of confidence in the state Assembly on July 29 (Monday) to prove his majority. Sources said the new CM is confident of winning it in the expectation that the 13 rebel Congress and JD(S) MLAs may abstain as they did on Tuesday last, giving him the edge.

Earlier this week, on Tuesday, the JD(S)-Congress coalition was ousted from power after it lost the vote on the confidence motion moved by outgoing CM H.D. Kumaraswamy.

Bookanakere Siddalin-gappa Yediyurappa had a green shawl thrown across his shoulders as he took the oath as CM watched by hundreds of his admirers, dignitaries, BJP leaders such as former external affairs minister S.M. Krishna and even rebel Congress leaders like Roshan Baig and Magadi Balakrishna. He had earlier served as CM for eight days (November 12, 2007 to November 19, 2007) and occupied the office again in 2008 to continue in the post till 2011, before he had to step down after the Lokayukta indicted him in illegal mining cases.

In 2018, Mr Yediyurappa took the oath as CM for the third time after the BJP became the single largest party in the Assembly but could survive in the post for only 48 hours after the Congress and JD(S) formed a coalition to bring him down.

Sources said the BJP central leadership gave the green signal to Mr Yediyurappa to stake claim to form the government after consulting senior Supreme Court lawyers. A state BJP delegation which had camped in Delhi reportedly convinced Mr Shah that the BJP would be able to muster the required numbers in the Assembly when Mr Yediyurappa seeks a trust vote.

These sources said the BJP national leadership was considering the option of imposing President’s Rule because of the uncertainty over the disqualification of the rebel MLAs, but reportedly changed their strategy after getting information that the Congress and JD(S) were trying to upstage them by installing a new coalition government with former minister R. Ramalinga Reddy as CM, hoping he would be able to secure the support of some of the rebel MLAs.

On Friday morning, Mr Shah called Mr Yediyurappa and asked him to stake claim, following which the veteran leader rushed to Raj Bhavan to meet the governor. With not much time left, the CM-designate himself telephoned the Opposition leaders, including outgoing CM H.D. Kumaraswamy, but they skipped the programme taking strong objection to the governor’s decision to make Mr Yediyurappa CM when he did not have the “required numbers” to prove his majority.

According to these leaders, the present strength of the Assembly is 222, including one nominated member, and the support of 112 is required to prove the government’s  majority.

However sources said the BJP has 105 MLAs and can bank on the support of one Independent, which means it  is still ahead of the combined strength of the Congress-JD(S) coalition, which is 102. Another point of worry for the Congress is that two of its legislaters, B. Nagendra and Shrimanth Patil, were hospitalised during the trust vote of the H.D. Kumaraswamy government earlier this week, with sources claiming they may abstain again when Mr Yediyurappa seeks a trust vote, further depleting the coalition’s numbers.

In another shot in the arm for the BJP, the rebel MLAs now camping at an unknown destination, seemed to be unperturbed by the disqualification of three rebels by the Speaker on Thursday and said they were ready to face any consequences but will not return to their respective parties at any cost.

This has virtually sealed the hopes of the Congress and JD(S) to win at least a few of them over and defeat the confidence motion when it is moved by Mr Yediyurappa in the Assembly on Monday.

Soon after assuming charge, the new CM, popularly known as “Raithara Bandhu” (farmers’ friend) for his pro-farmer policies, announced that the state government will deposit an additional Rs 4,000 in the account of farmers, besides the contribution of the Centre under the Pradhan Mantri Kisan Samman Nidhi Yojana.

The decision was taken at the first Cabinet meeting of the new government. Before the Lok Sabha elections, the Narendra Modi government at the Centre had announced that it will deposit Rs 6,000 per year in farmers’ accounts under the Kisan Samman Nidhi Yojana. The CM has now decided to pay an extra Rs 4,000 in two instalments and farmers in the state will thus get Rs 10,000.

“Farmers are my top priority, due to continuous drought, they are suffering and even committing suicide,” Mr Yediyurappa said. Another major decision pertains to the waiver of weavers’ loans amounting to Rs 100 crores. “Like farmers, weavers are also in debt. Their contribution to the state is immense and so I have earmarked Rs 100 crores for their loan waiver”, e added.