'K'taka Assembly session will be called on July 29 at 10 am for moving confidence motion and for passage of finance bill,' he said. 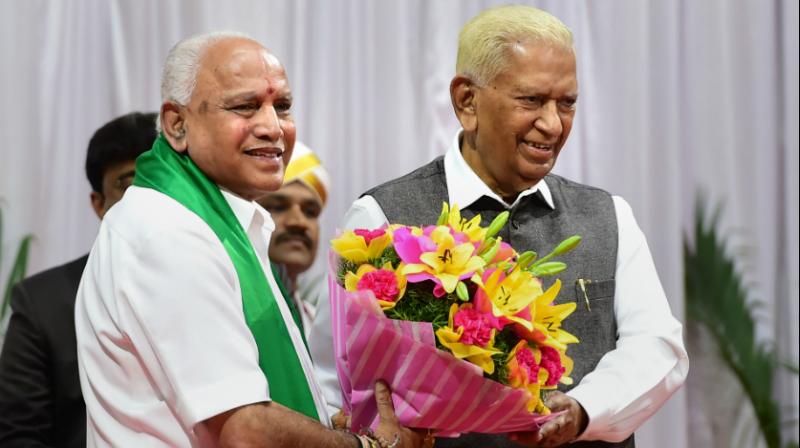 Yediyurappa said the legislative council would begin its proceedings on July 30. (Photo: PTI)

Bengaluru: Karnataka BJP’s BS Yediyurappa was sworn in as the Chief Minister for a fourth time on Friday. He alone took oath, succeeding HD Kumaraswamy, three days after the Congress-JD(S) coalition government collapsed. Governor Vajubhai Vala administered the oath of office and secrecy.

After taking oath, Yediyurappa said he would move the motion of confidence in the Assembly on July 29. "The Karnataka Assembly session will be called on July 29, Monday, at 10am for moving confidence motion and for the passage of the finance bill," he said.

Yediyurappa said the legislative council would begin its proceedings on July 30.
He also changed the spelling of his name from Yeddyurappa to Yediyurappa.

His swearing-in came after weeks of political crisis triggered by the resignation of rebel Congress and JD(S) MLAs that led to the fall of the coalition government on Tuesday.

In 2018, he survived barely for three days before stepping down as chief minister in May as he was unable to shore up numbers to get the majority despite the BJP having emerged as the single largest party in the 2018 assembly polls.

After the disqualification of three rebel Congress MLAs, the current strength of the 225-member assembly, excluding the Speaker, is 221 and the half-way mark 111.

The present party position is BJP along with one independent 106, Congress 76 (including MLAs decision on whose resignations and disqualification plea is pending), JDS 37 (including resigned and pending disqualification), one BSP, one Nominated and the Speaker, who has a casting vote in case of a tie.

The Speaker is yet to decide on the resignations of 14 MLAs and disqualification petitions against them, three of whom are from JD(S) and the rest from the Congress. He had on Thursday disqualified three rebel Congress MLAs.