A defence spokesman here said that a grand function was held at the Kargil War Memorial in Drass in which all the three service chiefs took part. 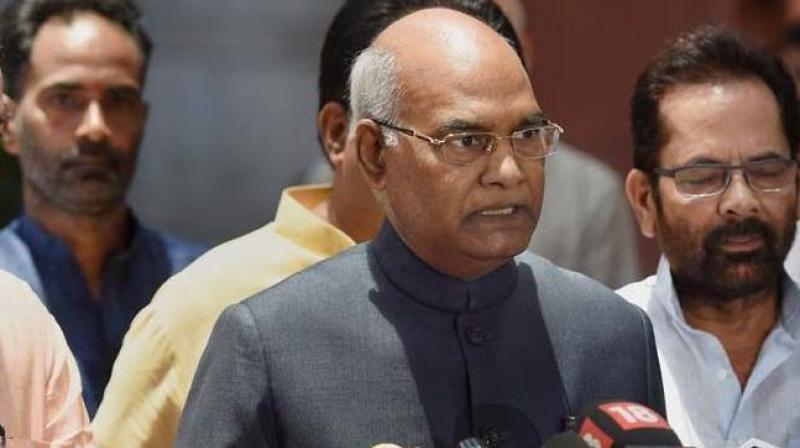 Srinagar: President Ram Nath Kovind said on Friday that India remains grateful to the members of its armed forces who fought with valour and made supreme sacrifices during the Kargil war.

The President paid tribute to the slain soldiers on the 20th anniversary of the Kargil war by laying a wreath at the war memorial at the Army’s 15 Corps headquarters in Badami Bagh Cantonment in Srinagar.

He was along with J&K governor Satya Pal Malik scheduled to join ‘Kargil Vijay Diwas’ celebrations at Drass in Kargil district but could not fly there due to inclement weather over Zoji-la hills.

After laying the wreath at the war memorial at the Badami Bagh cantonment here, he tweeted “On #KargilVijayDiwas, paid tributes to our martyrs at Chinar Corps (15 Corps) War Memorial in Srinagar. India remains grateful to those in our Armed Forces who served in the Kargil conflict and defended our sovereignty with incredible valour.”

In another tweet, he said, “On Kargil Vijay Diwas, a grateful nation acknowledges the gallantry of our Armed Forces on the heights of Kargil in 1999. We salute the grit and valour of those who defended India, and record our everlasting debt to those who never returned. Jai Hind.”

Drass had witnessed pitched battles between the Indian Army and a mix of Pakistani Army regulars and intruders for nearly two months in the summer of 1999.

A defence spokesman here said that a grand function was held at the Kargil War Memorial in Drass in which all the three service chiefs took part.

“The celebration marks the gallant victory of the Indian armed forces who fought the Pakistani intruders between May-July 1999 in the Drass, Kargil and Batalik sectors of western Ladakh. All the three service chiefs took part in the wreath laying ceremony at the iconic Kargil War Memorial in Dras on the foothills of Tololing on the occasion,” the spokesman said.

General (retired) V.P. Malik who was the Army chief during the Kargil war and several senior military and civilian dignitaries, veterans and ‘Veer Naris’ were also present on the occasion.

Proceedings of the day began with wreath laying by senior dignitaries at the imposing war memorial. This was followed by flagging In of the “Victory Flame” by the Army chief and merging of the same with the Eternal Flame at the Kargil War Memorial. “The Victory Flame was lit by Defence Minister Rajnath Singh on July 14 from the Eternal Flame at the National War Memorial. It reached Drass after having traversed a distance of over 1000 kilometres from New Delhi, carried by relay through major cities and towns in north India,” the spokesman said.