Sikkim records its first death, leaving only Mizoram as the only state without a COVID fatality 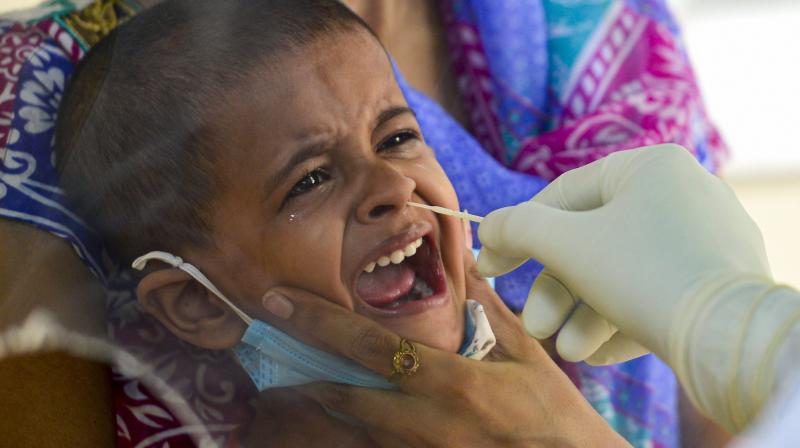 A medic collects a sample from a child for COVID-19 test in New Delhi. The situation in Delhi has started stabilising as the number of fresh cases continues to be on a decline. (PTI Photo)

Just the bare figures in the past week shows the momentum of the juggernaut: The one million mark was overcome on July 16; the 11 lakh mark on July 19; 12 lakh on July 22; 13 lakh on July 24; and 14 lakh on July 26. Each day has seen an addition of at least 48,000 new cases. Such is the pace of new positives that India’s new case graph has been above the 7-day average for the past 19 days.

On Sunday, Prime Minister Narendra Modi said in his Mann ki Baat radio address that India is in a much better position compared to other nations. Compared to only two other nations really, Brazil and USA.

On Sunday Sikkim reported its first death due to COVID-19, leaving Mizoram as the only state in India that has not had a single death due to the virus. Sikkim has witnessed a spurt in new cases, which prompted the state administration to extend its lockdown till August 1. Sikkim till date has 499 detected cases.

While experts have been predicting a peak soon in the three frontline states of Maharashtra, Tamil Nadu, and Delhi. But there’s been no such sign in any of those states, with Maharashtra adding on more than 9000 new cases in each of the past five days.

Tamil Nadu’s tally mounted the 2 lakh mark on Sunday. Only Delhi’s corona vigour seems to have eased a bit. The situation in Delhi has started stabilising as the number of fresh cases continues to be on a decline and fatalities too have come down significantly.

However, Andhra Pradesh leapfrogged into the fourth place on Sunday, with an addition of 7500 cases on Snday. Numbers are burgeoning in Karnataka too while Odisha, Bihar, West Bengal and Uttar Pradesh are the new emerging hotspots in the country.

The Health Ministry of course told us the positive side of the story. India has also registered highest ever recoveries in a single day after more than 36,000 patients were discharged. Officials said recoveries have outnumbered active COVID-19 cases by more than 4 lakh and the recovery rate has touched a new high of nearly 63.92%. This has taken the total number of recovered cases to 8,85,576.

“With 4,42,263 samples tested in the last 24 hours, the number of tests per million (TPM) has further increased to 11,805 and cumulative testing to 1,62,91,331. Aggressive testing along with ramped up hospital infrastructure by combining public and private sector efforts has enabled early identification and prompt triaging of COVID-19 patients leading to lower fatalities. As a result, the case fatality rate is progressively falling and currently, it is 2.31%. India has one of the lowest fatality rates in the world,” officials said.