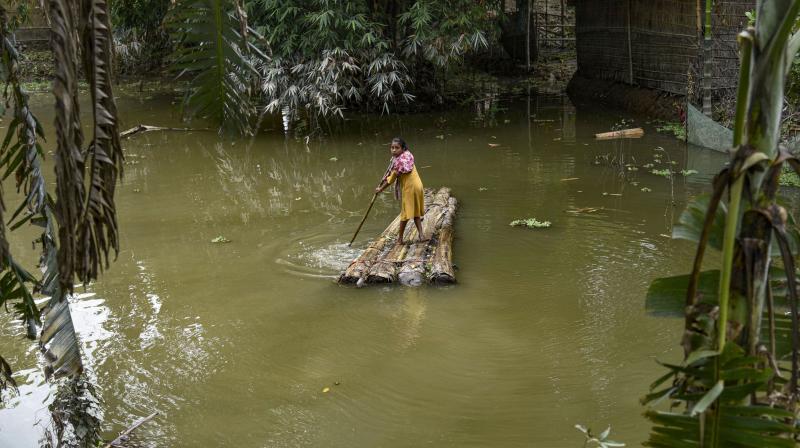 A village girl rows a makeshift raft to cross a flood-affected area in Morigaon district of Assam. PTI Photo

Former Assam additional chief secretary C K Das, who served in the state's revenue department for a long time, pointed out that as land holdings in Assam are much smaller compared to other states, around 10 lakh families have become landless due to erosion over the years.

Asserting that erosion is a much bigger threat to Assam than floods, Das said people can recover from the losses caused by floods by resorting various alternative means of farming after the flood water recedes.  But in the case of erosion, people their lands itself and have to migrate. In some cases, entire villages have been washed away due to erosion.

Natural disasters like earthquakes have a devastating impact on the topography of  a region. Das recalled that river beds in Assam became shallower after earthquakes in 1897 and 1950, which reduced the water carrying capacity of the rivers and aggravated erosion. If one examines the maps of the Survey of India since 1872, it is easily visible that the width of the Brahmaputra has increased in several stretches along its course through Assam.

Das believes that there should be technical studies of this phenomena by technical institutes, which can help in identifying places where land can be reclaimed. The quality of embankments has been one of the major reasons behind the escalating devastation caused by rivers in Assam.

The state government does extend relief to families that are affected by erosion, but steps like giving a one-time grant of Rs. 5 lakh to buy land is not a sustainable solution to the problem of erosion.

There have been petitions made to New Delhi to treat erosion as a natural calamity so that adequate compensation can be paid to people who lose their land in erosion. However, nothing has been done bar allowing erosion-hit people to live on embankments or encroaching upon government lands.