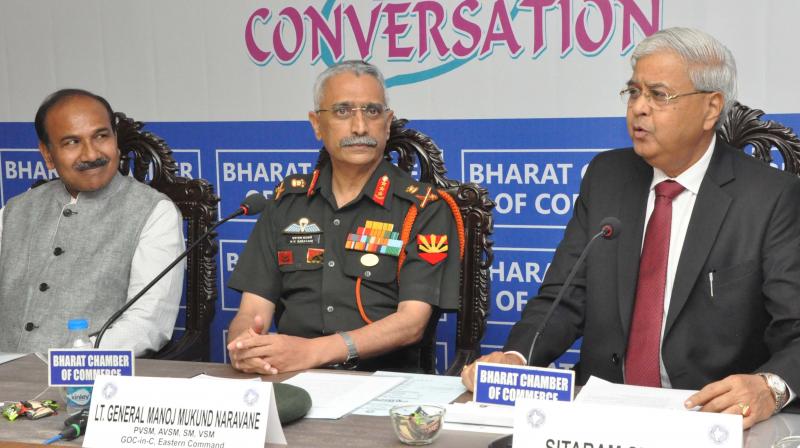 Lt Gen Naravane, who is tipped to be the next Army Chief also, added, "Once we get feedback from them we can then think of more such defence corridors. Your suggestion of having one such in the east is definitely doable.’ (Photo: AA)

Kolkata: Outgoing General Officer Commanding-in-Chief of the Eastern Command Lieutenant General Manoj Mukund Naravane on Tuesday underlined the possibility of a defence corridor in the eastern parts of the country. Recalling his past experience of his tenures in the North-East, the Vice Chief of Army Staff designate observed that economic development by dint of a defence corridor can tackle insurgency also.

"We can certainly think of a defence corridor in the east. Let us first see how the currently planned defence corridors actually get established and what is the intricacy of those and what are they going to manufacture, its output and what actually manifests on ground," he said at 'Defending Our Borders' organised by the Bharat Chamber of Commerce.

Lt Gen Naravane, who is tipped to be the next Army Chief also, added, "Once we get feedback from them we can then think of more such defence corridors. Your suggestion of having one such in the east is definitely doable." He was replying to a proposal of BCC president Sitaram Sharma during the interaction in presence of a group of diplomats.

He elaborated, "Yes, I agree that we need to change our focus from north south axis, say Delhi-Jammu-Mumbai, to further East. This is my seventh posting in the Eastern Command. I am quite familiary with the problems and travails of the East. Actually that is the need of the hour. When you see insurgency, it happens when there is no economic development and a sense of deprivation."

The Eastern Army Commander explained, "The moment you have economic development and factories running, automatically people will not go to lean towards other causes. The bottomline is every insurency everywhere is for econmoy. The moment we address that, all the other things will follow." Fomer Indian Air Force chief Air Chief Marshal Arup Raha also endorsed the feasibility of a defence corridor in the east.