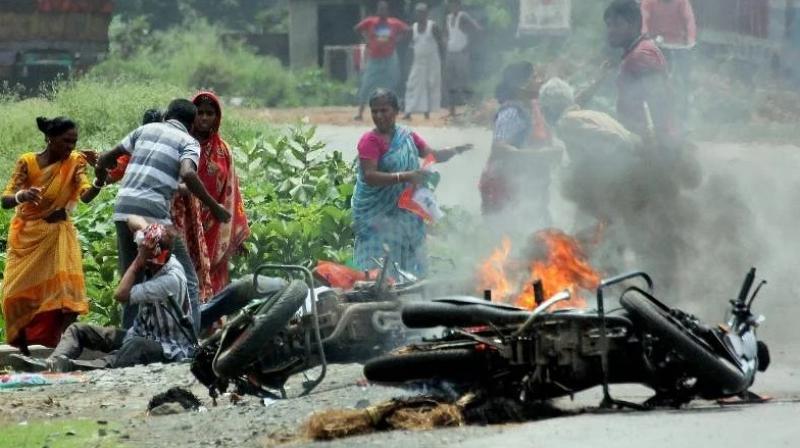 People injured in poll violence sit by the side of a road as a vehicle is set on fire by locals during Panchayat polls in Nadia district of West Bengal. (Photo: PTI/File)

Kolkata: Launching its probe into the West Bengal post-poll violence, the Central Bureau of Investigation on Thursday registered nine first information reports after an order by a five-judge bench of the Calcutta high court last week. It plans to lodge more cases in the days to come on the basis of information provided by the state police.

The CBI, according to sources, has also set up four special investigation teams (SITs), which includes special crime branch officers, and will open camp offices in districts to probe the cases on the charges of murder and rape for which it has started recording statements of the family members of the deceased and affected persons.

Fearing disruption and resistance by ruling Trinamul Congress workers during the probe, the Union home ministry has allotted four companies of the CRPF for the security of CBI officials in the state.

Among the four CRPF companies, two companies have been deputed for the protection of the CBI officials in Kolkata, sources said, adding that the remaining two will accompany the CBI teams during their visits in the districts for their probe.

One of the nine cases filed so far is about the alleged murder of a young BJP trade union worker, Abhijit Sarkar, by a group of TMC workers by lynching at Narkeldanga in north Kolkata after the announcement of the Assembly election results on May 2. The statement of his older brother Bishwajit was recorded at the CBI office in the CGO Complex at Salt Lake a few days ago.

At around 11.15 am on Thursday, that coincided with Abhijit’s birthday, a CBI team of 20 officers, led by a joint director, and a Kolkata Police team visited the victim’s house at Narkeldanga. In Bishwajit’s presence, two female CBI officers recorded the statement of his mother.

Other officers collected Abhijit’s video and call recordings in his mobile phone of May 2. CCTV footage of that day showed Sarkar being dragged from the house and beaten up on the street that led to a BJP party office in the area, the CBI discovered.

Later, the CBI team visited the house of another slain BJP worker, Jai Prakash Yadav, at Bhatpara in North 24 Parganas at around 2.10 pm and questioned his family members. They also inspected the spot where bombs were hurled at Yadav by TMC workers on June 8 which had claimed his life.