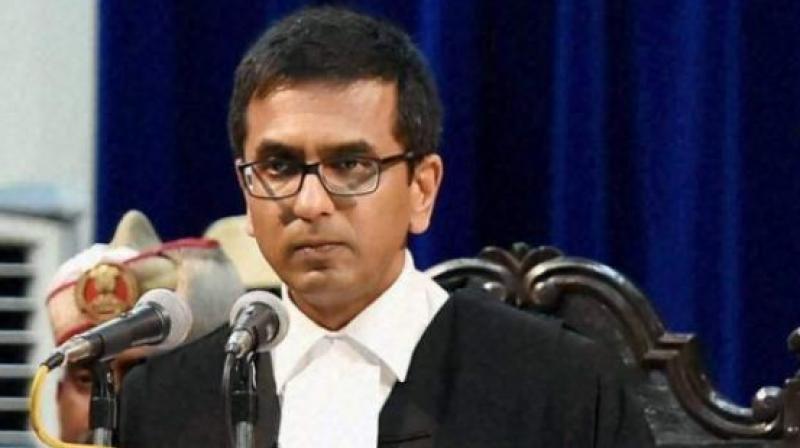 in August last year, Justice DY Chandrachud had overruled another of his father's judgement while delivering the verdict on the issue of privacy. (Photo: File)

New Delhi: It was the second time that Justice D Y Chandrachud overruled the verdict of his father, Chief Justice of India Y V Chandrachud, as he gave his order on the issue of adultery on Thursday.

The son had done it in August last year too when he had overruled another of his father's judgement while delivering the verdict on the issue of privacy.

Thirty-three years after his father, the then Chief Justice, had upheld the validity of adultery law, Justice D Y Chandrachud overruled it on Thursday saying the earlier view cannot be regarded as "correct exposition" of the constitutional position.

In his historic judgement of August last year declaring privacy as a fundamental right, he had termed as "seriously flawed" the 1976 verdict in the famous ADM Jabalpur case in which his father was part of the majority judgement by a five-judge constitution bench.

In the ADM Jabalpur case, the five-judge bench by a majority verdict of 4:1, had arrived at the conclusion that Article 21 is the sole repository of all rights to life and personal liberty and when suspended, takes away those rights altogether.

On Thursday, in his verdict striking down section 497 of the Indian Penal Code (IPC) dealing with the offence of adultery, Justice D Y Chandrachud "overuled" his father's 1985 judgement on the same subject.

The May 27, 1985 judgement by a three-judge bench in Sowmithri Vishnu versus Union of India was penned by then CJI Y V Chandrachud who had dismissed the petition challenging the validity of section 497 of the India Penal Code, which dealt with the offence of adultery.

"It is better, from the point of view of the interests of the society, that at least a limited class of adulterous relationship is punishable by law. Stability of marriages is not an ideal to be scorned," the then CJI had said.

However, his son on Thursday said the decision in Sowmithri Vishnu case dealt with "constitutional challenge by approaching the discourse on the denial of equality in formal, and rather narrow terms".

"'Sowmithri Vishnu' fails to deal with the substantive aspects of constitutional jurisprudence which have a bearing on the validity of section 497: the guarantee of equality as a real protection against arbitrariness, the guarantee of life and personal liberty as an essential recognition of dignity, autonomy and privacy and above all gender equality as a cornerstone of a truly equal society," he said.