The chopper belonged to Indian Army's 667 Army Aviation Squadron based in Misamari in Assam. 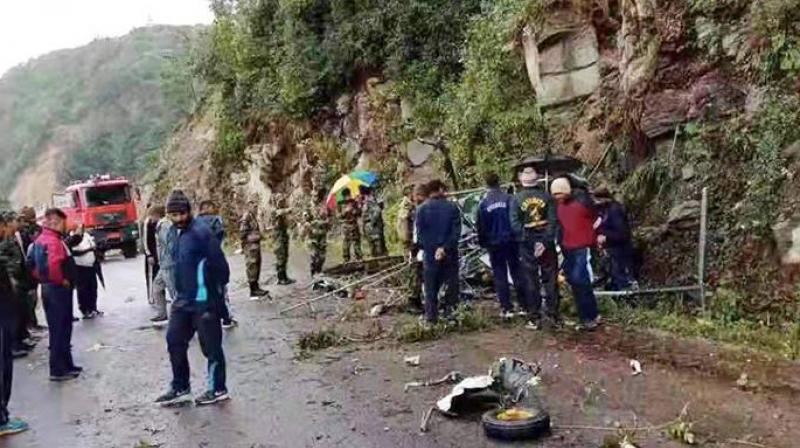 The single-engine Cheetah Helicopter of the Indian Army was on duty en-route from Khirmu(Arunanchal) to Yongfulla(Bhutan) on duty where it crashed. (Photo: ANI)

New Delhi: Two pilots one from Indian Army and the other from Royal Bhutan Army died in a helicopter crash in Bhutan on Friday.

The single-engine Cheetah Helicopter of the Indian Army was on duty en-route from Khirmu(Arunanchal) to Yongfulla(Bhutan) on duty where it crashed.

The chopper belonged to Indian Army's 667 Army Aviation Squadron based in Misamari in Assam. The chopper was returning after dropping an Indian Army Major General posted with Indian Army Military Training Team deployed in Bhutan.

As a part of the arrangement between Indian and Bhutan, Bhutanese pilots have been training with the Indian Army since 2014-15.

Cheetahs are 1960 vintage planes which have been in the Indian Army for the last over 40 years and several attempts to replace them have failed due to one reason or the other.

"In an unfortunate incident, an Indian Army Helicopter has crashed at 1 pm near Yongphulla in Bhutan. The helicopter went out of radio and visual contact soon after 1 pm. The helicopter was on way from Khirmu (Arunanchal) to Yongphulla on duty," said Army Spokesperson Colonel Aman Anand

"Ground search and rescue were launched immediately from Yongphulla. The wreckage has been located," he said