These rallies would culminate in meetings and rallies where Gandhi stayed in the state. 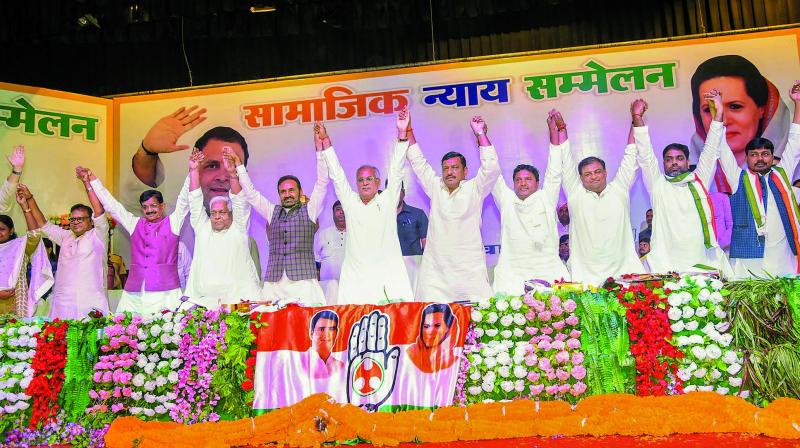 New Delhi: At a time when the Narendra Modi government is set to embark on massive celebrations to mark the 150th birth anniversary of Mahatma Gandhi, the Congress ruled state of Chhattisgarh is trying hard to not let another one of its party icon’s legacy be usurped by its political opponent.

In an attempt to maintain and further strengthen the link of Congress with the Mahatma, the Bhupesh Baghel government has decided to launch massive statewide programmes based on Gandhian principles.

The programmes to be launched in October 2 by the chief minister are aimed at promotion of Swadeshi, freeing the state from malnutrition and provision of universal healthcare for all citizens.  Also, a special one-day session of state Assembly to acknowledge the contributions of the Father of the Nation.

There will also be statewide campaign of mass contact — Gandhi Gaon Gothan Abhiyaan — under which rallies would be conducted across all villages to commemorate the contribution of Mahatma Gandhi to the nation.  These rallies would culminate in meetings and rallies where Gandhi stayed in the state.

Interestingly, the BJP is believed to have already usurped Sardar Patel from the Congress and with massive programmes on Mahatma Gandhi being undertaken by the Centre on October 2 annually, like the Swachch Bharat Abhiyaan, the Congress is desperately trying to avoid a repeat.

Sources stated that the state would embark upon a massive programme “Mahatma Gandhi Suposhan Abhiyaan” which aims to remove malnourishment from the state, which has a population of over 40 per cent of its population residing below the poverty line. Action plan has been chalked out with a target to free Chhattisgarh from malnutrition and anemia in next three years, sources stated.

A media campaign, featuring chief minister Bhupesh Baghel, has also been launched to reach out to the masses with these schemes.

Under the Mukhya-mantri Shahar Slum Swasthya Yojana, the state will deploy mobile medical team along with available health facilities to cater to heath care needs of over 7.8 lakh people of these families.

Under the scheme, initially three mobile medical teams will be deployed in Raipur, two each in Bhilai and Korba and one each in other municipalities.

While the universal PDS promises to increase amount of food grains available through primary ration cards and set eligibility criteria for general category families to avail food grains as well.

Sources stated that these schemes would aim to provide relief to the poverty stricken people of the state and also to fill gaps in their requirements for health and nutrition the ideas that were considered close to ideals followed by Mahatma Gandhi.

The Congress had last year stormed to power removing the BJP government of Dr Raman Singh after a 15-year stint, securing 68 seats in the 90 member state Assembly. However, the thingswere reversed in the recently concluded Lok Sabha polls where the Congress was only able to secure two of the 11 seats with nine being taken by the BJP candidates.

In an effort to regain lost ground chief minister Bhupesh Baghel has seemingly went into an overdrive with these universal health and nutrition schemes being seen as an attempt by Baghel at consolidation of power in the state.

The Baghel Cabinet had recently also given its approval to the highest reservation quota system - 82 percent seats being reserved in government jobs and educational institutions — in the government sector in the country. Baghel government had increased the quota of politically significant OBC community — which constitutes almost 50 percent of the state’s population, from existing 14 percent to 27 percent. An additional 10 percent seats have also been reserved for the students belonging to financially weaker unreserved sections.