India   All India  27 Sep 2019  Kashmir Valley on edge ahead of UNGA meet
India, All India

Kashmir Valley on edge ahead of UNGA meet

PM Modi is slated to speak at UNGA before Imran Khan today. 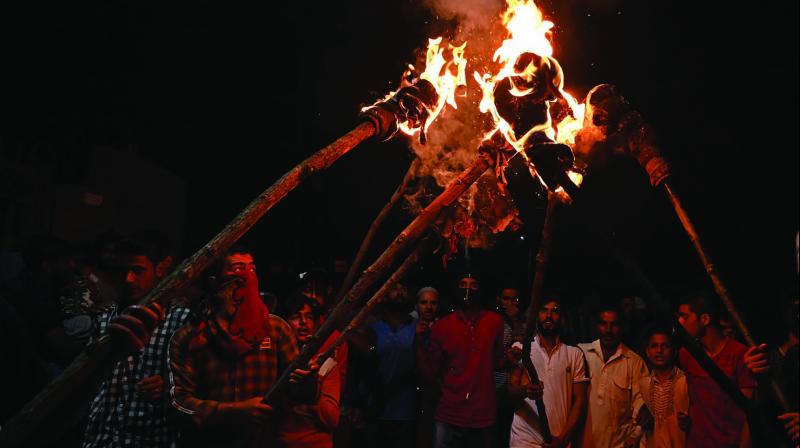 Kashmiri youth take ‘torch’ procession in Srinagar’s Anchar area on Thursday evening to demand “freedom” from India and also protest against the abrogation of Article 370 of the Constitution. (Photo: H.U. Naqash)

Srinagar: Amid rising tensions ahead of the scheduled speeches of the Prime Ministers of India and Pakistan at the 74th session of the United Nations General Assembly (UNGA), the security across Kashmir Valley and parts of Jammu region has been beefed up further. Also, the authorities are contemplating to re-impose curfew-like restrictions in Srinagar and other major towns of the Valley from dawn on Friday.

Prime Minister Narendra Modi is slated to speak at the UNGA before his Pakistani counterpart Imran Khan on September 27. India has made it clear that it will not mention Kashmir at all during the time allotted to it at the global forum as abrogating Jammu and Kashmir’s special status under Article 370 of the Constitution and bifurcating the state into two Union Territories (UTs) is an entirely internal issue.

However, the Pakistani Prime Minister will, in all probability, seize the opportunity to raise the Kashmir issue and the persisting stalemate over the Centre’s August 5 contentious moves that affected normal life in the Valley on the 53rd day running on Thursday. The continued incarceration of Kashmiri political leadership-both so-called mainstream and separatists- may also be used by him to uphold Islamabad’s claim that the situation in J&K is “quite alarming.”

Also, various groups of Kashmiri and Pakistani expatriates and supporting outfits including pro-Khalistan elements are planning anti-India protests outside the UN headquarters in New York on September 27 during Mr Modi’s speech which comes four years after he last addressed the UNGA. Back home too, the prospect of some people holding protests and even making attempts “to disturb peace”, most probably after the weekly Friday congregations, has prompted the authorities to ask for spiraling the security bandobast all over the Valley and parts of Jammu region. The authorities have alerted the security forces also for possible militant strikes on or around September 27. The police sources said that the security at and around the Srinagar Airport is at “maximum alert”.

Several Valley residents interviewed on Thursday said that Pakistani Prime Minister will raise the Kashmir issue at the UNGA “vociferously”. Strangely, many people in the Valley do expect “something big” will unfold with regard to Kashmir during the UNGA session particularly on September 27. “It is going to be a very important day for us. Whatever happens there (at the UNGA) will determine the future thinking of the world community on Kashmir,” said Abdur Razzak (name changed), an elderly person who was part of a small protest demonstration held in Srinagar’s Batamallo area on Thursday.

The protesters, who were holding PoK’s official flag and a morphed picture of Mr Modi portraying him as reincarnation of Adolf Hitler, chanted anti India slogans and poured scorn on the Centre for its “snatching” J&K of its special status.

In the evening, hundreds of men and women took out a torch procession along the streets of Srinagar’s Anchar area demanding “freedom” from India, the witnesses said adding the procession, however, ended peacefully.