Party workers sat on dharna for hours and raised slogans against the government. 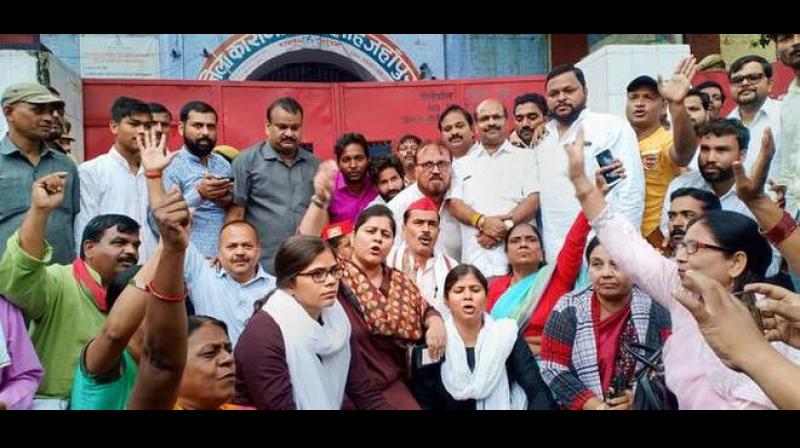 Alleging that the law student was made to give her statement under pressure by the SIT, Singh asked if “this is the reality of beti bachao-beto padhao campaign of the BJP.” (Photo: PTI)

Shahjahanpur: Samajwadi Party workers staged a dharna here on September 27 after not being allowed to meet the jailed law student, who has accused former union minister Swami Chinmayanand of rape.

On the directions of the party president, Akhilesh Yadav, the delegation comprising former spokesman Nahid Lari Khan and former students union leader of Allahabad University Richa Singh arrived at the jail where the law student is lodged on extortion charges.

On being denied permission to meet the woman, the delegation and party workers sat on dharna for hours and raised slogans against the government.

They later visited her residence to meet her family members.

Addressing a press conference, Richa Singh said that a CPI(M) team was allowed to meet the woman on September 26, however, they (SP delegation) were denied permission by the jail superintendent as he did not have orders from his seniors.

“Our local leaders had moved an application for the meeting in the morning itself,”  Singh said.

Alleging that the law student was made to give her statement under pressure by the SIT, Singh asked if “this is the reality of beti bachao-beto padhao campaign of the BJP”.

Nahid Lari Khan said the SIT has not included sections of rape in the FIR against Chinmayanand and it appears that “under the BJP government, cases will be filed after asking the accused what sections he wants to include“.

“Chinmayanand gets pictures clicked with Chief Minister Yogi Adityanath and RSS chief Mohan Bhagwat. He was the union minister in Atal Bihari Vajpayee government. This is the reason why BJP is saving him,” she said.

“We have collected information from the family members of the woman and will submit the report to our president. SP is with the victim and her family,” she added.