Hoping to tap farmer anger, Congress is out to tease more parties out of the NDA 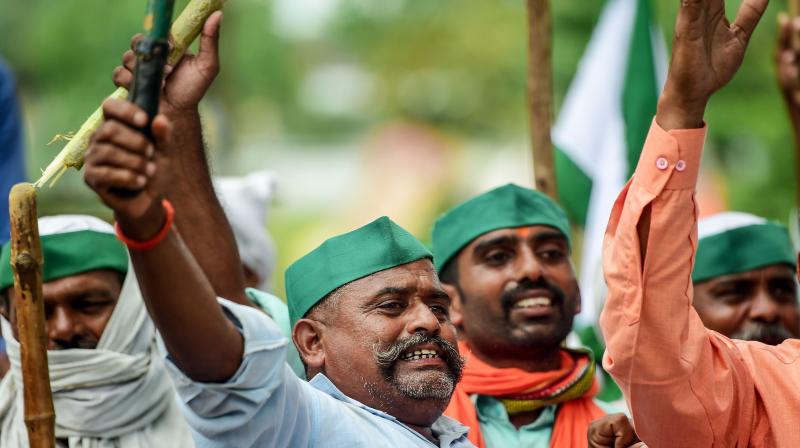 Farmers of the Bharatiya Kisan Union shout slogans against the Union government during a farmers' protest against three farm bills. (AFP)

New Delhi/Chandigarh: With the Akali Dal breaking out of its alliance with the BJP, the opposition is now trying to seduce other NDA parties out of the ruling coalition.

But the government is going ahead at breakneck speed on the three farm legislations it rammed through Parliament last week. On Sunday president Ram Nath Kovind gave his stamp of approval to all three bills that have triggered protests by farmers, especially in Punjab and Haryana.

According to a gazette notification, the president gave assent to: The Farmers' Produce Trade and Commerce (Promotion and Facilitation) Bill, 2020; The Farmers (Empowerment and Protection) Agreement of Price Assurance and Farm Services Bill, 2020; and The Essential Commodities (Amendment) Bill 2020.

The Farmers' Produce Trade and Commerce (Promotion and Facilitation) Bill, 2020 aims to permit the sale of agricultural produce outside the mandis regulated by the Agricultural Produce Marketing Committees (APMC) constituted by different state laws.

The Shiromani Akali Dal (SAD) has parted ways with the BJP on the issue of these farm bills as farmers in Punjab and Haryana intensified protest.  A day after the Akali Dal exit from the NDA, the Congress dared other BJP allies JDU, LJP and JJP to oppose the Centre and not to support the agriculture Bills, which it alleged were like cancer and slow poison that will kill farmers and farming.

At a joint virtual press conference, Congress' Haryana chief Kumari Selja and Punjab president Sunil Jakhar urged all parties to come together and oppose the legislations, which would make farmers "slaves of big businessmen".

Selja and Jakhar said NDA allies should support the opposition parties, the same way they extended support against the Land Acquisition Bill, which the BJP-led Union government was forced to withdraw.

On the Shiromani Akali Dal's exit from the NDA, Jakhar said the party did not quit the ruling coalition of its own. It was forced to do so by farmers, who made it difficult for the Akalis to enter Punjab without doing so, he said.

Jakhar said the Akalis had only staged a drama of first quitting the Union cabinet and then the alliance as the BJP openly said that they were very much party to the clearing of the Bills in the cabinet.

"The resignation by the Akali minister was not given but taken by the BJP and the Akali Dal did not quit the NDA of its own but were thrown out," he claimed.