State governments of Tamil Nadu, Chhattisgarh, Kerala, Punjab, Jharkhand and Andhra Pradesh have extended their support to the protest 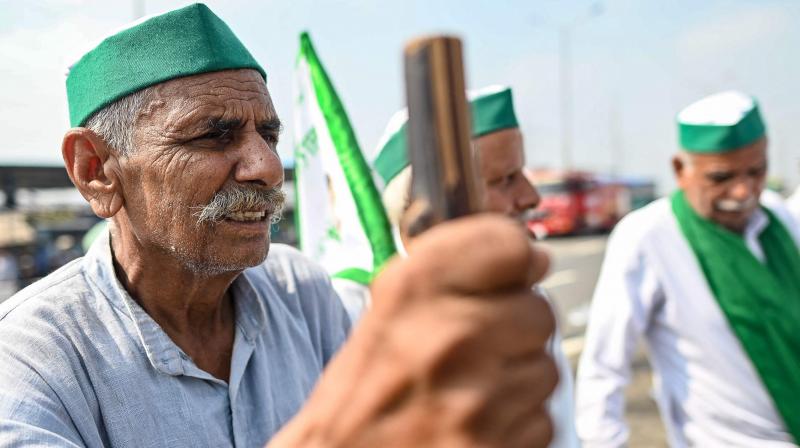 Farmers gather at the protest venue in Gazipur Delhi-Uttar Pradesh border during a nationwide strike called by the farmers as they continue to protest against the central government's agricultural reforms in Ghaziabad on September 27, 2021. (AFP)

New Delhi: Traffic movement in Delhi and neighbouring states were hit on Monday as farmers blocked roads and national highways as part of a Bharat Bandh today.

"Gazipur border is closed for traffic from both sides due to farmers' protests via NH 9 and NH 24. Commuters wishing to commute to and from UP may use DND, Vikas Marg, Signature bridge, Wazirabad road etc. The traffic of NH 24 and NH 9 are diverted on Road no 56 to take Maharajpur border, Apsara and Bhopura borders for UP," the Delhi Traffic Police tweeted.

Traffic movement was also closed on the Dhansa Border for both carriageways.

The Delhi Police has also closed all the routes leading to the Red Fort in the national capital and barricades were placed on the road as a precautionary measure.

Samyukt Kisan Morcha, a coalition of farmers' unions, has called for a nationwide Bharat Bandh today to mark the first anniversary of the enactment of the three farm laws.

Farmers have been protesting at different sites since November 26 last year against the three enacted farm laws: Farmers' Produce Trade and Commerce (Promotion and Facilitation) Act, 2020; the Farmers Empowerment and Protection) Agreement on Price Assurance and farm Services Act 2020 and the Essential Commodities (Amendment) Act, 2020.

Farmer leaders and the Centre have held several rounds of talks but the impasse remains.