India   All India  27 Oct 2018  BJP stands like rock with Sabarimala devotees: Amit Shah on over 2,000 arrests
India, All India

BJP stands like rock with Sabarimala devotees: Amit Shah on over 2,000 arrests

'We will always be there for the people of Kerala and the devotees of Lord Ayappa,' Amit Shah said. 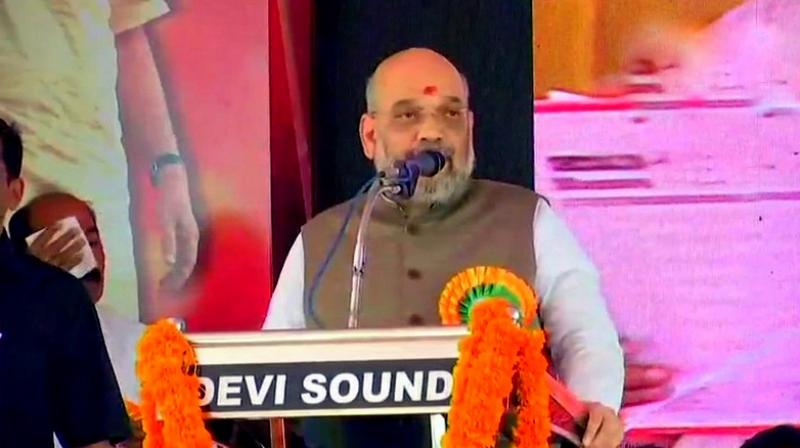 The BJP national president was addressing a rally at Kannur in Kerala after inaugurating a party office in the city. (Photo: ANI)

Kannur: Extending his party’s support to the people who held protests against the entry of women of menstruating age at the Sabarimala temple in Kerala, BJP president Amit Shah today said, “BJP is standing like a rock with devotees, Left government be warned.”

The BJP national president was addressing a rally at Kannur in Kerala after inaugurating a party office in the city.

Speaking at the event, Shah condemned the arrest of devotees protesting Kerala government’s decision to implement the Supreme Court’s verdict on the Sabarimala shrine.

"The Left government in Kerala has misused the Sabarimala issue. They have used it to arrest workers and supporters of the BJP and other political parties. More than 2,000 activists and workers from BJP, RSS and other organisations have been arrested. BJP is standing like a rock with devotees, Left government be warned," Amit Shah said, adding, "We will always be there for the people of Kerala and the devotees of Lord Ayappa."

"The deity at Sabarimala is a Brahmachari (celibate) and therefore women of a certain age aren't allowed. To those inciting violence, let me tell you that there are many temples in India which are exclusively for women and men aren't allowed. No man tries to enter," the BJP president said.

At least 2,061 people have been across Kerala after Chief Minister Pinarayi Vijayan on Thursday chaired a high-level meeting with police officials and ordered a crackdown on those defying the Supreme Court order on the entry of women in the hill-trop shrine of Lord Ayyappa. A total of 452 cases have been registered against 2,300 people.

Kerala BJP has extended full support to the agitation led by devotees of Lord Ayyappa to protect the centuries-old tradition of the Sabarimala temple.

The Supreme Court had on September 28 lifted a centuries-old ban on entry of menstrual age (10-50 years) from entering the Sabarimala temple, where a celibate deity Lord Ayyappa is worshipped.