Modi will be hosted by Abe for private dinner at his holiday home on Oct 28, perhaps, the first such reception extended to a foreign leader. 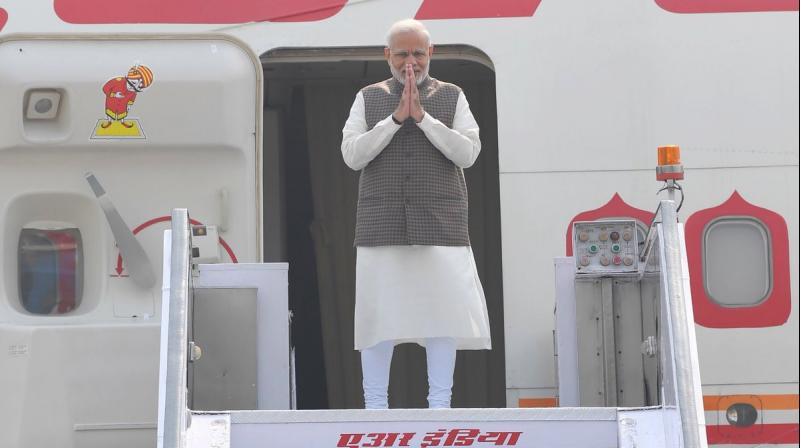 In a statement Friday, before leaving for Japan, Modi described India and Japan as a "winning combination" and said the island nation is New Delhi's most trusted partner in its economic and technological modernisation. He said India's partnership with Japan is of great substance and purpose.

"We have a special strategic and global partnership. Our ties with Japan, both economic and strategic, stand completely transformed in recent years. It is today a partnership of great substance and purpose. It rests on the strong pillars of India's Act East Policy, and our shared vision and commitment to a free, open and inclusive Indo-Pacific," he said.

Modi said it will be his 12th meeting with Abe since he first visited Japan as prime minister in September 2014. He said, as democracies, the two countries have shared values and they seek peace and prosperity for all.

"Our complementarities make India and Japan a winning combination. Japan today is one of the most trusted partners in India's economic and technological modernisations and one of the top investors in India," he pointed out.

The PM said projects such as Mumbai-Ahmedabad High Speed Rail and Dedicated Freight Corridors reflect the high level and "strength of our economic engagement".

"Japan is also at the forefront of engaging in our national initiatives, such as 'Make in India', 'Skill India', 'Digital India', 'Start Up India'... Japanese investors have faith in India's economic future, which is marked with myriad opportunities," Modi said.

He said India values Japan's global leadership in innovation, technologies and best practices and during his visit, he will have a chance to see some of Japan's high-tech capabilities in robotics.

"I will have wide-ranging talks with Prime Minister Shinzo Abe and interact with business leaders and captains of industry from both countries. I will also address the Indian community. These interactions will help to further strengthen our trade and investment ties, and cooperation in new areas such as healthcare, digital technologies, agriculture and food processing, disaster risk reduction and disaster resilient infrastructure," he said.

He recalled that last year, he had hosted Prime Minister Abe and his wife Akie Abe in his home state Gujarat.

In a special gesture, Modi will be hosted by his Japanese counterpart for a private dinner at his holiday home in the picturesque Yamanashi prefecture on October 28, which will be, perhaps, the first such reception to be extended to a foreign leader.

MEA Spokesperson Raveesh Kumar tweeted about Modi's departure and also shared a picture of the prime minister waving just before boarding the plane.

Visiting a valued friend & a partner in our progress!

PM @narendramodi emplanes for #Tokyo to hold the 13th #IndiaJapan Annual Summit with PM of Japan @AbeShinzo. On the agenda - opportunity to review the progress in our ties & deepen strategic dimension of our relationship. pic.twitter.com/sRT3JsVfuM

"Visiting a valued friend & a partner in our progress! PM @narendramodi emplanes for #Tokyo to hold the 13th #IndiaJapan Annual Summit with PM of Japan @AbeShinzo. On the agenda - opportunity to review the progress in our ties & deepen strategic dimension of our relationship," he tweeted.