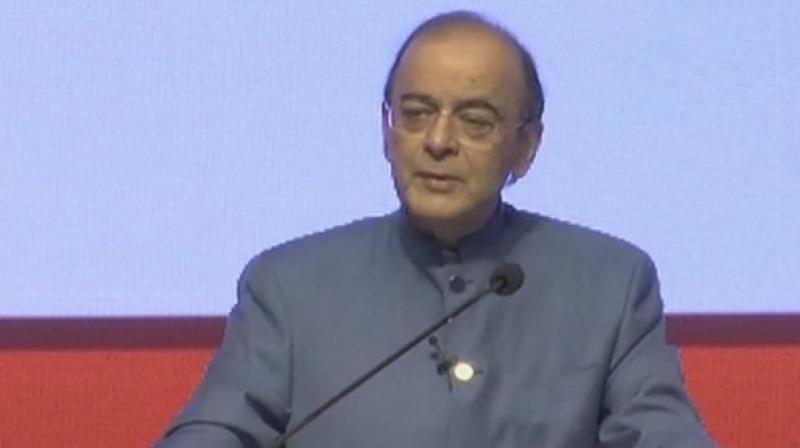 The Finance Minister also berated the pre-1991 governments for not having a viable economic policy, which could have placed India in the league of China. (Photo: ANI)

New Delhi: Finance Minister Arun Jaitley on Saturday asserted that the Congress party would have converted India into a kingdom if the second decade post-independence wouldn’t have witnessed the rise of alternate political ideologies.

Jaitley was addressing a gathering at 5th India Ideas Conclave. In the first edition of Atal Bihari Vajpayee Memorial Lecture, Jaitley spoke on ‘Challenges before Democracy’.

"Post-independence the dominant party of Indian politics for at least four decades was Indian National Congress. After the second decade in power, the party developed dynastic tendencies. But the party was still very large and dominant and that's the period when we saw the domination spread all over the country, state after state. Conventional non-congress parties, the communist shrunk to one particular region, the Lohia socialist were belligerent in their opposition but poor at organisation and therefore they frittered away. India needed an alternative ideological and political poll," said the Union Minister.

"The principal party from the weakness it showed in the second decade would have succeeded in converting India more into a kingdom rather than even a dynastic democracy because that's how the movement in that party went on," he added.

Jaitley then turned to the present Congress leadership and stated that it has undergone a degeneration of ideology.

“Would Indira Gandhi or Rajiv Gandhi ever have gone to a congregation where "Bharat ke tukde tukde" slogans were raised? Certainly not, but now degeneration of ideology because of personal grievances and ambitions compelled Congress party leadership to do so,” said the Bhartiya Janata Party (BJP) veteran.

Jaitley also outlined the contribution of former Prime Minister Atal Bihari Vajpayee in the expansion of BJP across India and said, "The Bharatiya Jan Sangh also lost in the first 30 years after independence. A capacity to win was very difficult but it was the personality of Atal Bihari Vajpayee, who in 1957 had entered parliament leading a small motley group of MP's. The alternative voice was his."

He also took the occasion to underline that Vajpayee was nothing like former Prime Minister Pandit Jawahar Lal Nehru.

"BJP's critics called Atal Bihari as a politician in Nehruvian mould; nothing can be further from the truth. He was a democrat like Pandit ji would have been but he created a political organisation which stood completely opposite in many ways to the ideological position of the Pandit ji. And that had made India's democracy more meaningful," Jaitley remarked.

“His (Atal Bihari Vajpayee's) single best speech according to me was in Parliament in May 1964, when as a 38-yr-old MP and leader of Jana Sangh, he stood up to pay his obituary tribute to Pandit Nehru. In my view, in independent India, a speech of that quality is unprecedented,” Jaitley opined.

The Finance Minister also berated the pre-1991 governments for not having a viable economic policy, which could have placed India in the league of China.

"I firmly believe that pre-1991 economic policies were flawed and economic liberalisation could have dated at least 20 years earlier and we have been China league. From 1947 to 1991 we suffered slow growth rate and very slow reduction in poverty level," he asserted.