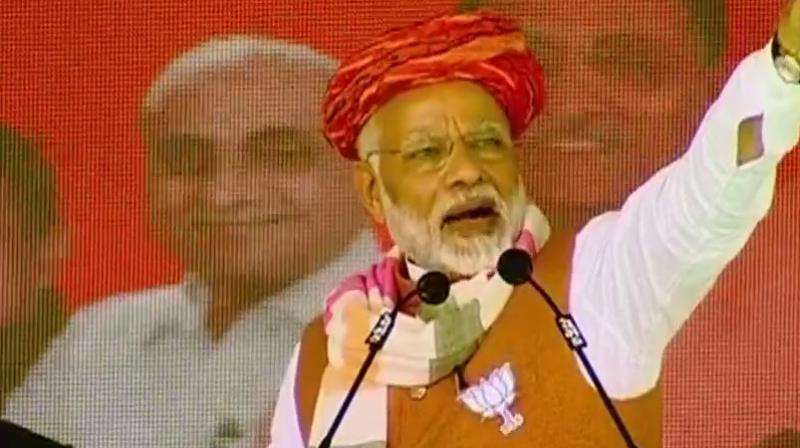 Further intensifying his attack on the Opposition Congress, Modi said the grand old party did not allow Narmada water to come to Kutch region and has always wanted Gujarat to lag behind. (Photo: Twitter | ANI)

Bhuj: Launching his political campaign in poll-bound Gujarat on Monday, Prime Minister Narendra Modi took a jibe at Congress and said, "India was attacked on 26/11 and in Uri. You can see how India responded in wake of both attacks. This explains difference between their (Congress) government and ours (BJP). Indian Express reported that on that side, dead bodies were taken in trucks so at least you (Cong) don't lie."

"A Pakistani court released a Pakistani terrorist and the Congress is celebrating. I was surprised why. And this same Congress refused to believe our own Army on surgical strikes and preferred to believe the Chinese Ambassador," Modi said.

Invoking the "Iron Man of India," Modi accused the Congress of insulting Sardar Patel. "We are not here for power, we are here for 125 crore Indians. We want to take India to new heights of glory," he said.

"Congress is unhappy about demonetisation. They keep attacking me but I want to tell them... I have grown up in the same land as Sardar Patel. I will ensure that the poor get their due. We will not allow this nation to be looted," he said.

The Prime Minister also alluded to allegations thrown at him during the campaign by Congress leaders, including party vice president Rahul Gandhi.

"This Gujarat son has no stains in his public life. You come to the state and level baseless allegations on the son of the soil... the people of the state will not forgive you," he said.

During his campaign in the state in the last few days, Rahul had trained his guns at the Modi-led government over the Rafale fighter aircraft deal.

"The Gujarat election is a contest between trust on development and dynastic politics," the Prime Minister said.

Taking another dig at the Opposition party, which is making all efforts to dislodge the long-ruling BJP in Gujarat, Modi asked, "When our soldiers were standing eye-to-eye in Doklam for 70 days, why were you hugging the Chinese ambassador."

The Prime Minister also attacked the Congress over dynastic politics.

"On one side there is Vikas (development) and Vishwas (trust) while on the other side there is Vanshwad (dynasty). Gujarat will never forgive the Congress party and this has been the case for long. Congress has never liked Gujarat, has always preferred to see it lag behind," Modi said.

"Does any Congress leader talk about Kamraj, Acharya Kripalani, Subhas Babu, UN Dhebar (who belonged to Gujarat)...no because they only talk about one family," the PM said.

Further intensifying his attack on the Opposition Congress, Modi said the grand old party did not allow Narmada water to come to Kutch region.

Referring to the 2001 earthquake in Kutch, Modi said, "When earthquake struck Kutch region in 2001, Atal Bihari Vajpayee sent me to the region to work among its people and that taught me a lot."

"The development work in Kutch after the 2001 quake is for all to see. Who imagined that Kutch can do so well in agriculture. People from the nation are coming here to enjoy the Rann Utsav," the Prime Minister said.

Narendra Modi praised the people of Kutch for their resilience.

"When big earthquakes take place, people say see this building has fallen but in Kutch people say this school, this hospital, these buildings were made after the earthquake. All this was done on war footing by the Army of Kutch which consists of its people," Modi said.

Prime Minister Narendra Modi will address between 32 and 35 rallies in his home state Gujarat in the coming fortnight, where Assembly elections for a total of 182 seats will be held in two phase - December 9 and 14.

Later on Monday, the Prime Minister will address rallies in Jasdan town of Rajkot, Dhari in Amreli and Kamrej in Surat district. Amreli is dominated by the powerful Patel community.