VHP show over, but Ayodhya drama on

Swami Paramhans Das further said that if the temple construction is to be decided by the SC, then the BJP should stop taking credit for the same. 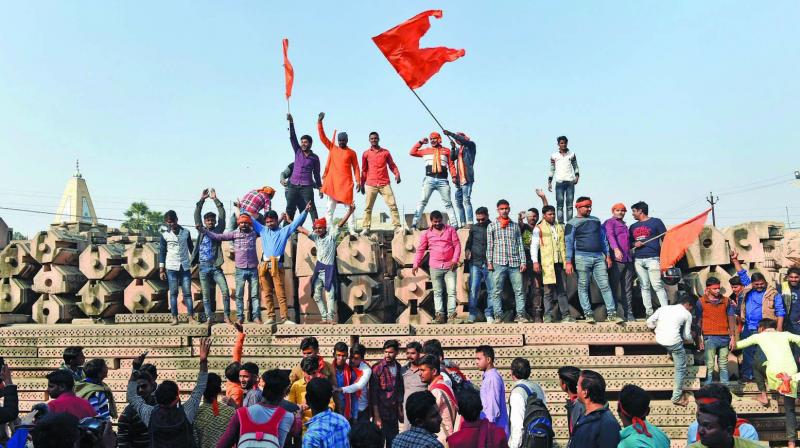 Supporters gather at Kar Sevak Puram as they participate in a ‘Dharam Sabha’, organised by the Vishwa Hindu Parishad to push for the construction of the Ram Temple, in Ayodhya. (Photo: PTI)

Lucknow: The Dharam Sabha of the VHP may be over but drama in Ayodhya over the Ram temple issue show no signs of wrapping up.

Swami Paramhans Das of Tapasvi Chavni has now announced that he would immolate himself on December 6 if the BJP government did not take any steps for Ram temple construction by December 5.

The saint has even prepared his pyre in Tapasvi Chavni. Swami Paramhans Das who had reached the makeshift temple with a brick but was not allowed to take it in, told reporters that, “ If all VHP saints had brought one brick each, a room for Lords Ram could have been constructed within hours.”

The Swami lashed out at the VHP and said that the Dharam Sabha was actually a Adharam Sabha and said that the event was hosted at the behest of the BJP in view of the 2019 elections. “The VHP did not invite saints – I was not invited. The BJP had given money to VHP to invite saints. The BJP is more interested in returning to power in 2019 and for this, it is willing to go to any extent,” he said.

He asked BJP to stop playing games also asked UP chief minister Yogi Adityanath to get the temple built if he was a true follower of the Lord.

“We do not want statues of Lord Ram—we want temple and Yogi should understand this,” he added.