India   All India  28 Jan 2018  In caring for bulls, we have forgotten the people
India, All India

In caring for bulls, we have forgotten the people

All that the animal welfare enthusiasts are asking is for better treatment of the bulls, which is a fair call. 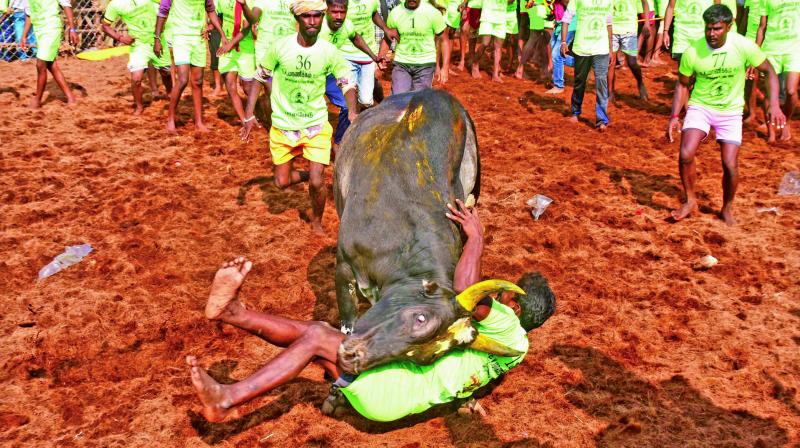 TN could claim that its jallikattu is older than the bull runs and Spain may have borrowed an idea from here as the claims are that some form of bull taming has been going on since at least the Sangam Age.

There was a throwaway line somewhere saying that the Animal Welfare Board was happy that the bulls were not being harmed in the 2018 jallikattu series. If there ever was a people's welfare board, its members might have got vocal about the number of persons who have died or been maimed by raging bulls in the same series of jallikattu and manjuvirattu, etc. This is not to say that the taming of the bulls has suddenly found a critic. That would be far from the truth. But the events do suggest that we care a fig for safety.

The loss of lives has been quite terrible. And these are all young men who may have turned up to watch the jallikattu in some ill-protected village ground into which the raging bulls run after being released from the vaadivasal.

All the rules and regulations that were thought up during the resumption of rural Tamil Nadu's favourite annual sporting extravaganza in 2017 seem to have been subsumed in the  over enthusiasm to conduct the sport, come what may so long as the bull tamers are safe and the bulls are seemingly not tortured or tampered with in the preparation.

It is intriguing that the focus has shifted away from the number of people dying. The precautions have just not been taken in separating the bulls from the people in the handover areas or the paddock in horse racing terms.

Also, beyond the wooden galleries seating the spectators near the vaadivasal and the VIPs pandal, there is little by way of organisation as the charging bulls evade the tamers and run on.

It is learnt that most of the time they are running over thorny bushes and the like rather than any prepared ground akin to the red shale of Roland Garros. The argument that life is cheap is always a painful one to hear in India.

The point is we can do far better, like investing in proper fencing to separate the bulls from the spectators and get some semblance of order into the paddock area into which there should be no unauthorised entrants. Everyone should be warned that they are near the bulls only at their own risk.

It is not a test of valour to be near the bulls when you are a mere spectator who has come to watch the ‘valorous’ bull tamers take on the raging bulls. Such sports are best seen from a distance, not from the centre of the arena unless the person is a certified to be suicidal.

The city folks who turned up in lakhs last year to occupy the Marina may have had no idea how brutal the sport can be when a bull charges into a bank of people, thoroughly confused by all the noise and the fuss, besides having suffered the dark secrets of the ‘preparation’ for the events.  Twisting the tail of the bulls seems to be the favoured pastime of a few. They probably feel safe because they are behind the bull rather than in front of it. Whether this is valour is another uncomfortable question our brethren can answer. It is a peculiar that Tamil Nadu should have such distinct traits as a liking for bull runs as in Spain. Of course, the one crucial difference between the Pamplona Bull Run and our jallikattu is the TN bulls are not for slaughter. Each bull of the Pamplona run is supposed to end up in an arena where they will be killed.

All that the animal welfare enthusiasts are asking is for better treatment of the bulls, which is a fair call. However, in our concern for the bulls we seem to have forgotten about the hundreds of people who are falling victims to the great jallikattu tradition. After the 2018 Pongal experience, it is incumbent upon everyone in the sport to sit down and introspect whether all the deaths and the maiming of people, mostly spectators, are justified.

Just for the record, there is a small Spanish town where they hold an annual festival on January 16 in which horses burst through the soaring flames of night-time bonfires. “Riders urge their mounts toward the wood fires, lit in the cobbled street, and say the smoke that envelops them purifies and protects the horses during the following year. The bonfires are called “luminarias,” and the Las Luminarias festival is believed to be centuries-old. Some say it is related to ancient Catholic traditions of fighting disease through cleansing by smoke,” reads an AP report.

Mercifully, Tamil Nadu has not picked up the ancient horses-through-flames tradition from Spain. TN could claim that its jallikattu is older than the bull runs and Spain may have borrowed an idea from here as the claims are that some form of bull taming has been going on since at least the Sangam Age.  In the final analysis, it might be fine to keep old traditions alive provided, of course, that animals are not ill-treated and people not killed or maimed.