India and Cambodia also agreed on cooperation for prevention of human trafficking and a cultural exchange programme. 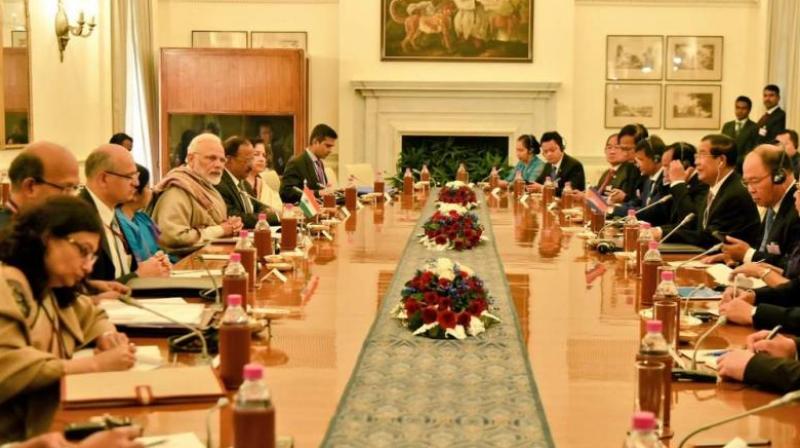 The pacts include a Line of Credit from India to finance the Stung Sva Hab Water Resource Development Project in Cambodia for $36.92 million and an agreement to improve cooperation in the prevention and investigation of crimes and legal assistance in criminal matters. Defence and IT ties will also be strengthened.

After delegation-level talks in New Delhi between Prime Minister Narendra Modi and Cambodian Prime Minister Hun Sen, India announced that a project development fund of Rs 500 crore has been founded for assistance to Cambodia. India will also double quick-impact projects — for which it provides assistance to Cambodia — from the annual five to 10. A centre of excellence in IT and IT-enabled service is also to be set up by India in Cambodia.

A joint statement said, “Terrorism cannot be used as an instrument of state policy for furthering narrow political objectives”. This statement is being seen as a veiled reference to Pakistan without naming it.

“The two leaders agreed that terrorism is a curse on human-kind and poses a grave threat to global peace, security and stability. They unequivocally condemned terrorism in all its forms and manifestations... They called upon all nations to adopt a comprehensive approach in combating terrorism, which should include countering radicalisation, recruitment, movement of terrorists, including foreign terrorist fighters...,” said the statement.

The two countries said that they support complete freedom of navigation and overflight and pacific resolution of maritime issues based on international law, notably the 1982 United Nations Convention on the Law of the Sea (UNCLOS), a significant assertion in the wake of the Chinese military posturing in the South China Sea.

The two leaders “expressed satisfaction at the current state of bilateral defence ties, including ship visits and training programmes, and also “agreed to exchanges of senior level defence personnel and capacity building projects”, the MEA said.

In a significant comment, Mr Modi hailed the restoration of the 12th century Angkor Vat temples as a symbol of Indo-Cambodian cultural cooperation and also “reaffirmed India’s commitment to undertake restoration and conservation work at the ancient temple of Lord Shiva at Preah Vihear” in Cambodia.

India and Cambodia also agreed on cooperation for prevention of human trafficking and a cultural exchange programme.