India   All India  28 Jan 2019  Drones to keep watch on Bangla border in Assam
India, All India

Drones to keep watch on Bangla border in Assam

BSF has identified the vulnerable stretches of the border and the gaps in fencing. 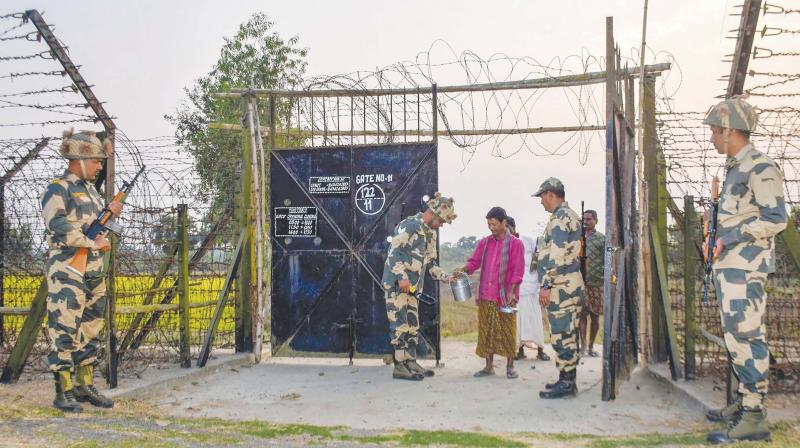 Guwahati: The ministry of home affairs has decided to induct Unmanned Aerial Vehicles (UAV) besides other technical gadgets for effective border management along the unfenced international border of India with Bangladesh in Assam.

The plan to upgrade frontier surveillance comes amid an uproar over identification of illegal foreigners in the state and governor Jagdish Mukhi’s remark that there is no place for illegal foreigners and only the indigenous people of the state have the right on its resources.

Informing that fencing the entire stretch of the India-Bangladesh border is not feasible due to several geographical barriers, security sources said that fencing on stretch of nearly 61 km in Assam was pending.

Pointing out that the ministry of home affairs has decided to manage about 48 kms of such stretch by non-physical barriers, security sources said that India has more than 4,000 kms of international border with Bangladesh and construction of physical barriers all along the border is not feasible because of geographical constrains like riverine border, elephant corridors, soil erosion and objections from Bangladesh.

Pointing out that the Border Security Force (BSF) has identified the vulnerable stretches of the border and the gaps in fencing, security sources said that various agencies engaged in border guarding have started using technological solutions to deal with the problem. A comprehensive border management system is being introduced to deal with infiltration and smuggling. The system, which is also called smart fencing, will be introduced all along the border starting with the vulnerable patches.

The Indian government has also started taking steps for strengthening the institutional framework to improve guarding of the border with Bangladesh. Standing committees, headed by the chief secretaries of the states having international border with Bangladesh, have been constituted to evolve a standard operating procedure of the border protection grid. All the stakeholders are included in the grid for proper response in case of a border defence breach, security sources added.

Sources said that some other measures, including increasing the strength of the BSF, have also been taken.

Informing that at present, 81 battalions of the BSF are deployed in over 900 border outposts constructed along the border, security sources said that steps have been taken to increase the strength of the BSF.

Moreover, the BSF personnel deployed along the international border with Bangladesh have also been directed to sensitise the local people and NGOs about the need to help the forces in dealing with infiltration.

Admitting that the topography of the border makes international border between Assam and Bangladesh vulnerable to infiltration and smuggling, security sources said that dense population right up to the zero line is another problem in ensuring border management.

The illegal migrants cross over, mingle with the population of the border areas by taking advantage of ethnic similarities, particularly in Assam and West Bengal, and stay on in India.

Moreover, due to the land boundary agreement between the two countries in 1974, the fencing has to be constructed beyond 150 yards from the zero line and in view of the habitation right up to the zero line, in some places it is not possible to put fencing.