This apart, there are many encroachments in the revenue lands, converting them to farmlands. 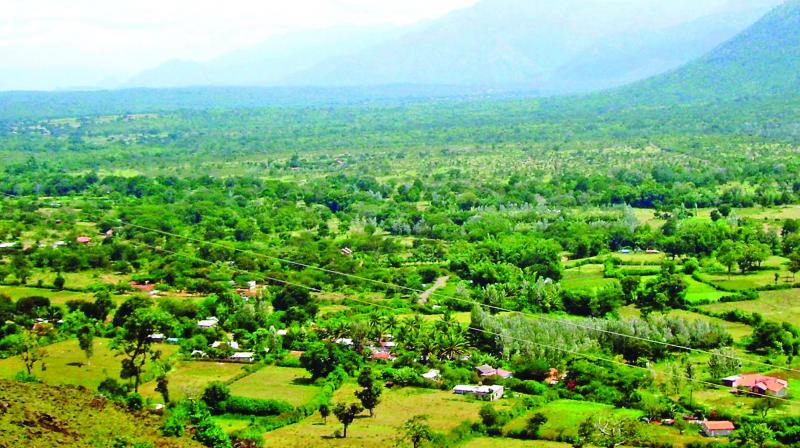 Panoramic view of the Segur valley elephant corridor as seen from Vibuthimalai spot near Bokkapuram in MTR. (Photo: Asian Age)

Ooty: The wildlife activists here are elated as the Supreme  Court directions on the retrieval of Segur Valley jumbo corridor near here have brought the 12-year- long-battle on the issue to the final stage.

Segur Valley elephant corridor is the natural pathway for migrating wild elephants  to travel between jungles in Kerala in Nilgiris west, Mudumalai and Satyamangalam  and Thengumarahada jungles east of Nilgiris.  The 22-km-long and 1.5-km-wide corridor is now part of the buffer zone of the Mudumalai Tiger Reserve(MTR).  While acres of private land are interspersed with jungles in this corridor, that includes over 1,000 acres of revenue land, over the decades many structures sprouted up in the private lands, most of them in violation of the Tamil Nadu Preservation of Private Forests Act (TNPPF Act).

This apart, there are many encroachments in the revenue lands, converting them to farmlands.

Nearly 800 structures have been constructed in this elephant corridor.  Out of which 400 structures with as many as 40 tourist resorts, that were sealed a year ago, have come up again without permission.

Though the Madras high court, after accepting the expert committee recommendations in 2009 on the retrieval of elephant corridor in

Segur valley that runs between Singara reserve forest and Segur reserve forest in MTR buffer zone limits, passed orders on establishment of the corridor, the case which went to the apex court took nearly a decade for the verdict to come.

Now, with the apex court indicating that it will accept the Madras high court's order and appoint a panel to
look into the issue on compensation for legitimate occupants in the corridor, it has become obvious that the Segur valley elephant corridor issue has entered the climax stage with hurdles to be removed for the jumbos to walk free.

Meanwhile, G. Janardhanan, president of Ooty Town Public Awareness Association, said that since many of the tourist resorts in the corridor were operating without any valid licences over the decades, it is time

the government instructed the income-tax department to recover the revenue earned by the illegal resorts and other encroachers to make a corpus fund for the welfare of anti-poaching watchers working in the forest department.