India   All India  28 Jan 2020  ‘Time to care’ about economic inequality in India
India, All India

‘Time to care’ about economic inequality in India

The creamy layer of the world population has collectively generated an enormous amount of wealth in the past 20 years. 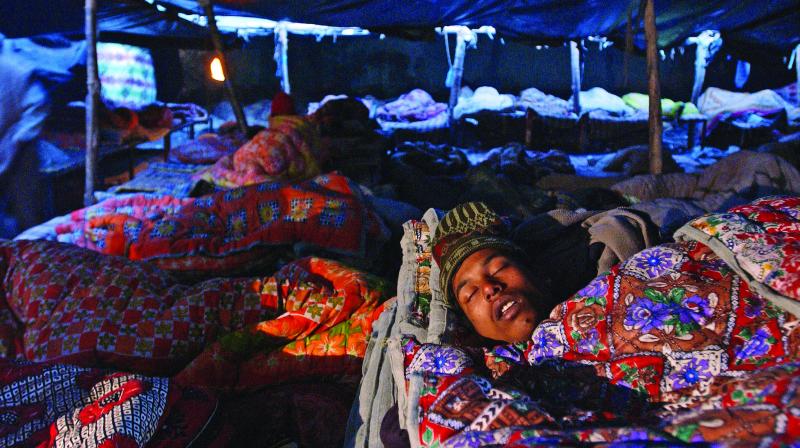 A man sleeps at a night shelter for poor and homeless people, in New Delhi, in the cold morning hours. (Photo: AFP)

India’s richest one per cent hold more than four times the wealth held by 953 million people who make up for the bottom 70 per cent of the country’s population, while the total wealth of all Indian billionaires is more than the full-year Budget, according to the study, “Time to Care” from Oxfam.

One of the most significant goals of inclusive and equitable development is poverty elimination. Although India has made rapid progress in several fields, its impressive economic growth has not trickled down to the larger population. India’s millions still continue to face mounting daily challenges and are struggling to meet the bare basic necessities of subsistence: education, health, housing, employment and adequate food. The fruits of India’s newfound prosperity have not flowed to the country’s low-income layers, and the outcome has been quite skewed. While a minuscule minority is enjoying astronomical prosperity, the vast majority continues to grapple with the same old problems.

The father of the nation, Mahatma Gandhi, had said that elimination of poverty was his mission and was also the prime objective of “Swaraj”, or freedom. In his famous speech, “Freedom at Midnight”, the first Prime Minister, Jawaharlal Nehru mentioned, “The ambition of the greatest men of our generation has been to wipe every tear from every eye. That may be beyond us, but as long as there are tears and suffering, our work will not be over.” Nehru reminded the country of the tasks that lay ahead and emphasised: “The service of India means the service of the millions who suffer. It means the ending of poverty and ignorance and disease and inequality of opportunity.” That mission of Gandhi and ambition of Nehru remains still a mirage, a far, distant dream.

India has witnessed relatively high aggregate economic growth, but also abounds in persistent and endemic deprivation and deep social failures. Appalling poverty and staggering inequalities continue to characterise the lower social and economic pyramid. Barring an impressive growth in per capita income which has inherent faultlines, India is actually falling behind its neighbours in South Asia in every social indicator that matters, from literacy to child malnutrition to access to toilets. This imbalance is largely on account of the continued neglect, in the post-reform period, of public involvement in crucial fields such as social security, basic education, healthcare, gender equity, and civil rights. India’s development landscape is dotted with schemes that sounded ambitious but were very poorly led and funded and simply didn’t deliver.

The creamy layer of the world population has collectively generated an enormous amount of wealth in the past 20 years. Most of that newly generated wealth has gone to those who are already affluent. This has particularly been acute in developed countries.

There are two main areas where changes to policy could boost economic equality: taxation and social spending.

1. Progressive taxation where corporations and the richest individuals pay more to the state in order to redistribute resources across society.

2. Social spending on public services such as education, health and social protection, is also important. There is a strong case in India for free, universal public services.

One of the ideas India is seriously weighing is Universal Basic Income (UBI). In a UBI system, the government gives citizens a regular infusion of free cash with no strings attached. There are, however, several downsides: In the words of Thomas Piketty, the renowned French economist, “The cost of substantial fiscal redistribution would be considerable, because it would decrease the return on investments (for individuals) in human capital and thus decrease the incentives for individuals to make such investments.” It is important that UBI should not be seen as a replacement for properly funded public services and social protection measures — these are the essential building blocks of fair and thriving societies. UBI should, in fact, be an additional tool in the social welfare arsenal.

While providing free income for a short period, we need to plan for empowering grassroots communities to chart out their path out of poverty. This will require a recast of our development paradigm. The perception that the poor do not have skills or would not be able to survive on their own is now being widely recognised as a myth. This conclusion is grounded in the premise that a paternalistic conceit of low-income communities and negative beliefs perpetuated about them has hindered their development. The new findings are challenging traditional development wisdom — particularly the fallacious assumption that the poor need a great deal of advice, aid, support and motivation to improve their lives.

Universal Basic Income is an old idea that is gaining traction as governments look to revamp their social safety nets. India is the most serious new aspirant. If implemented, India would join Finland in providing free money to its citizens. However, in terms of the Congress Party’s promise, the poor will continue to draw other social benefits. There is not much evidence of UBI’s potential and it would be a drastic step to adopt it with little proof that it works.

UBI is a broad, non-targeted periodic cash payment unconditionally delivered to all, rich or poor, on an individual basis. The idea is to ensure that every person in society has the means to live with a modicum of freedom and dignity, independent of one’s capacity to earn or the availability of employment. Cash transfers are not tied to the recipients’ behaviour, and they are free to spend the money as they wish. In contrast, an example of a conditional, in-kind transfer in India would be the mid-day meal scheme, where the meal — an in-kind transfer — is conditional upon attending school.

UBI offers less scope for corruption than most anti-poverty schemes because all individuals are entitled to the same amount of money. Moreover, the digital payment mode leaves no scope for middlemen to sponge funds. The recent transfer of the government’s first tranche of basic income into farmer’s accounts was accomplished quite seamlessly.

A UBI guarantees that people will not be impoverished, will not go hungry, and will be protected from job loss due to automation while cutting the need for many other forms of social security. A basic monthly income can also replace a string of welfare subsidies for the poor that India currently has in place, although the Congress Party has been very clear that it has no intention of tinkering with them. Getting a guaranteed, regular infusion of cash can certainly make people happier and less stressed (even if that cash isn’t enough to cover all their needs). Yet most countries aren’t doing it.

In India, over a hundred schemes are delivered to the same set of beneficiaries through mutually insulated administrative silos, each set up by Central government ministries jealously intent on guarding their respective fiefdoms. Thus, a convergence of these schemes at the point of delivery is made virtually impossible. This negates any positive effect that would operate if the beneficiaries themselves were to have the authority to plan the utilisation of these resources and match them to their own priorities.

Digital tools have made possible the idea of directly transferring cash to India’s poor instead of attempting to provide services directly. Direct transfers represent a paradigm shift in how India handles the welfare of its poor. Cash transfer initiatives can also plug the massive inefficiency with which the Indian government handled its welfare programs in the past. For example, under the food security program, the government would set a high fixed price for grains from farmers, purchase these grains directly, and then redistribute them to the poor at a lower price, making up the difference with a massive subsidy.

However, cash transfers are no panacea for India’s poverty problem. Some quasi-cash transfer plans, such as the “food stamp” programme, restrict spending to only essential items such as food. Compared to traditional policies relying on subsidies and direct provision of goods, direct cash transfers increase the autonomy of India’s poor. But they also present substantial risk. To ensure that cash transfers reduce poverty over time, the poor must spend more on food, education, and healthcare. In some cases, additional spending power could go toward “inessential” consumption — spending that does little to improve the lot of India’s poor.

Although India is a good case for basic income, there are several challenges. The leadership class repeatedly turns to policies that sound appealing but are doomed to fail — and then their failure ensures that the country won’t face the issue head on. The government will have to change course and shift away from the legacy mindset to get things right.