During his visit to the state, Mr Shah will also address BJP workers of six Assembly constituencies virtually 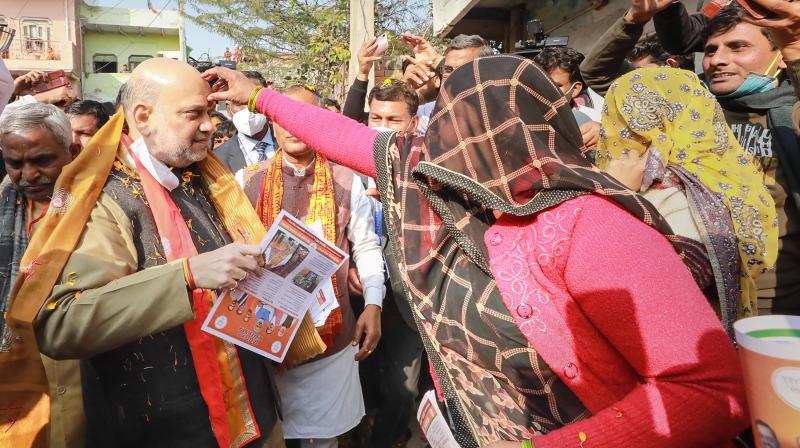 New Delhi: A day after he reached out to western Uttar Pradesh’s Jat community and made overtures to Akhilesh Yadav-led SP’s ally, RLD, for a post-poll alliance, Union home minister Amit Shah on Thursday visited Mathura to drum up support for the BJP. RLD chief Jayant Chaudhury has rejected the offer, labeling it as a “political stunt” and claimed that the SP-RLD alliance will be voted to power by not just the jats but the entire state.

Meanwhile, in the poll-bound state of Uttarakhand, which Mr Shah will be visiting on Friday, former PCC chief Kishore Upadhyaya joined the saffron fold after he was expelled from the Congress for six years for “anti-party activities”. Mr Upadhyaya, who joined the BJP early on Thursday in Dehradun, is likely to be fielded from the Tehri Assembly seat whose sitting MLA from the BJP, Dhan Singh Negi, joined the Congress later in the day.

In Mathura, where some Hindu outfits have been trying to revive the demand of Krishna Janambhoomi temple on the lines of the campaign for a temple on Ram janambhoomi, Mr Shah attacked the previous SP regime for “goonda raj” and said that UP poll results will “decide India’s destiny.”

“For the last 7.5 years we have had our government but not even Rahul Baba can accuse us of corruption. Currency notes are coming out from the house of Akhilesh Yadav’s associates... Akhilesh Yadav should not talk about law and order as there was goonda raj during their regime... India cannot progress unless UP is progressing... It is UP that will decide India’s destiny,” said Mr Shah, who participated in a door-to-door campaign in Mathura. He also participated in another door-to-door campaign in Gautam Buddh Nagar later in the day.

In Uttarakhand on Friday Mr Shah will participate in a door-to-door campaign in Rudraprayag and will also meet ex-servicemen and women's groups.
BJP president JP Nadda will also visit the state on January 30.

During his visit to the state, Mr Shah will also address BJP workers of six Assembly constituencies virtually.

Though the BJP is confident of retaining power in the hill state, it is facing rebellion by some of its leaders, including some sitting MLAs who have been denied tickets. Mr Shah is likely to meet some of these leaders to pacify them.