India   All India  28 Feb 2019  As long as Pak harbours terrorists, we will target their terror camps: Army
India, All India

As long as Pak harbours terrorists, we will target their terror camps: Army

The briefing was postponed by 2 hrs after Pak PM announced that he would free captured pilot Abhinandan tomorrow as a ‘gesture of peace’. 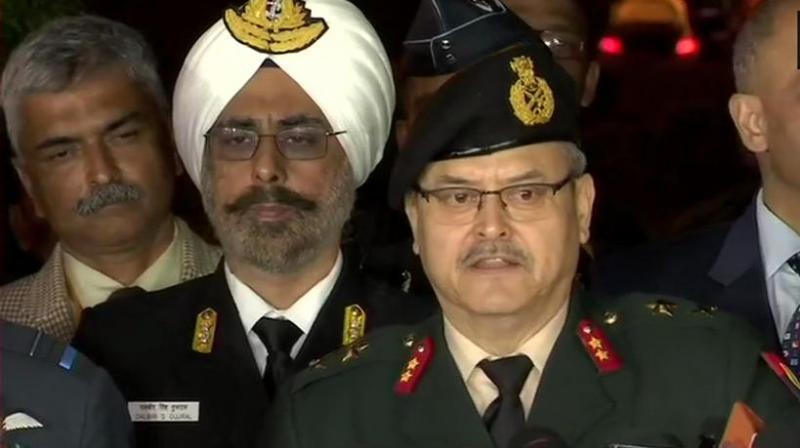 'Pakistan has targeted our military installations. They have escalated matters. If they provoke us any further, we are prepared for exigencies, said Major general Surendra Singh Mahal. (Photo: ANI | Twitter)

New Delhi:  In the first joint briefing since the Indo-Pak tension, the Army, Navy and Air Force said they were fully prepared and in a heightened state of readiness to respond to any provocation by Pakistan.

"Pakistan has targeted our military installations. They have escalated matters. If they provoke us any further, we are prepared for exigencies," said Major general Surendra Singh Mahal.

Major General Mahal added that as long as Pakistan continues to harbour terrorists, India will continue to target the terror camps.

Continuing to address the media,  Air Vice Marshal RGK Kapoor said, “Indian Air Force fighters were tasked to intercept the intruding Pakistani aircraft and managed to thwart them. Although Pakistan Air Force jets dropped bombs, they were not able to cause any damage.”

“One Pakistani F-16 was shot down by an IAF MiG 21 Bison Aircraft.East of Rajouri, parts of F-16 have been recovered, inside Indian territory. Also, IAF is happy that Wing Commander Abhinandan is returning tomorrow,” Air Vice Marshal added.

#WATCH Air Vice Marshal RGK Kapoor: We are happy that our pilot who had fallen across the Line of Control and was in custody of Pakistan is being released, we're extremely happy to have him back. We only see it as a gesture which is in consonance with all Geneva conventions. pic.twitter.com/Dg5Cpel4Lw

Proving India’s claim, Air Vice Marshal Kapoor said there is enough evidence to show that F-16s were used in this mission through their electronic signatures. Parts of AMRAAM, air to air missile which is carried only on the Pakistani F-16s was recovered east of Rajouri within the Indian territory.

Talking about the aerial strike by India Air Force, Kapoor said that it would be premature to say number of casualties on the camp, whatever IAF intended to destroy they got that result.

Visuals of cover of AARAM missile fired from Pakistani F-16 aircraft found near the LoC in India pic.twitter.com/qHdOm5cDqN

Supporting the Indian Army and Indian Air Force, Navy’s Rear Admiral DS Gujral said, “We are ready for any misadventure by Pakistan and we are ready for resolute action. We want to ensure safety and security of our citizens.”

The briefing was postponed by two hours from 5 pm after Pakistan Prime Minister Imran Khan announced that he would free captured pilot Abhinandan Varthaman tomorrow as a "gesture of peace".