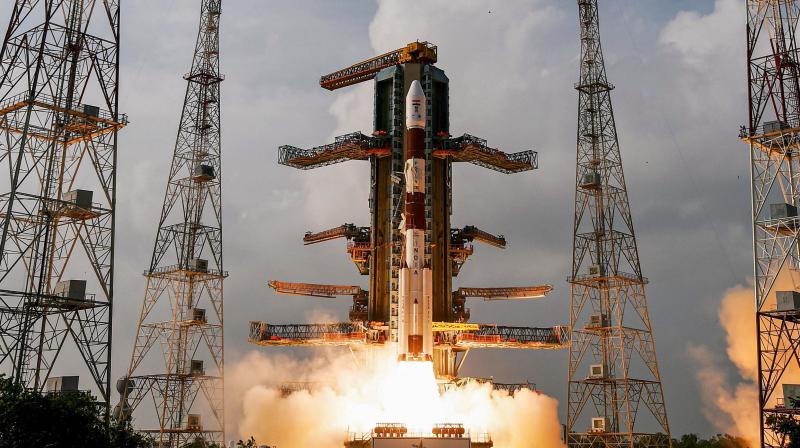 Subject to weather conditions, the blastoff is scheduled at 10.24 am from the Satish Dhawan Space Centre, Sriharikota, where the countdown for the mission commenced at 8.54 am on Saturday. (Representational Photo: PTI)

Nellore: All remained set for a rocket launch with a big difference from the Sriharikota spaceport on Sunday. The first-time launch of a Brazilian satellite Amazonia-1, this being the first launch of ISRO in 2021, will also see the sacred Hindu text, the Bhagavad Gita, being carried to the Space in secured digital (SD) card format.

This apart, a picture of Prime Minister Narendra Modi will remain engraved atop the panel of a co-passenger satellite. There will also be some 25,000 names onboard SD SAT, all sent in by people on request from Space officials for placement in Space.

Subject to weather conditions, the blastoff is scheduled at 10.24 am from the Satish Dhawan Space Centre, Sriharikota, where the countdown for the mission commenced at 8.54 am on Saturday.

The PSLV-C51 rocket, which is the 53rd mission of the Polar Satellite Launch Vehicle, will launch Amazonia-1 of Brazil as the primary satellite and 18 co-passenger payloads from the first launch pad of the Sriharikota spaceport in Nellore district.

These co-passenger satellites include the Satish Dhawan Sat (SD SAT) from Chennai-based Space Kidz India (SKI). The picture of PM has been engraved atop the panel of this spacecraft.

The 18 co-passenger satellites include four from the Indian National Space Promotion and Authorisation Centre (IN-SPACe). Among the four, three are UNITYsats from a consortium of three Indian academic institutes and one of the Satish Dhawan Sat from Space Kidz India, and 14 from NSIL.

Among the 14 satellites, 12 USA satellites are christened as SpaceBEEs meant for 2-way satellite communications and data relay.

The Space Centre is fortified in view of the launch. CISF and police teams were deployed as additional forces to tighten the security at the spaceport.

ISRO officials including its chairman Dr K. Sivan were camping at Shar to oversee the launch. Sivan offered prayers at the holy shrine in Tirumala as well as at the Changala Parameswari temple in Sullurpeta for the success of the first mission in 2021.