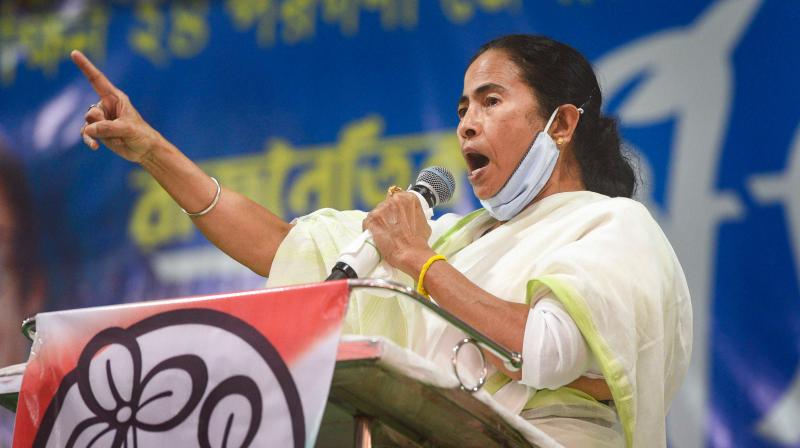 The BJP, which has set an ambitious target of 200-plus Assembly seats, out of the total 294, is highlighting how the state under Mamata Banerjee-led TMC government is facing politicisation of the administration, criminalisation of politics and institutionalisation of corruption. — PTI

New Delhi: Intensifying the slogan war in West Bengal, which faces an eight-phase election from March 27 to April 29, ruling Trinamul Congress and the Opposition BJP are now emphasising on who is the “real daughter” of the state.

After TMC countered the BJP’s assertion that only a “son of Bengal” will be the next chief minister once it comes to power, with the slogan of “Bangla nijer meyekei chay (Bengal wants its own daughter)” on posters that had chief minister Mamata Banerjee’s photo, the BJP has now come out with the slogan “Bangla nijer meyeke chai, Pishi nai (Bengal wants its own daughter, not pishi (paternal aunt).”

The BJP’s poster carrying this slogan has nine women leaders of the state, including Rupa Ganguly, Deboshree Chaudhary, Locket Chatterjee, Bharti Ghosh, Agnimitra Paul and Mafuja Khatun among others.

Giving a tough challenge to the ruling TMC, the BJP has been labelled as “bahirgatas (outsiders)” by the TMC.

Poll strategist Prashant Kishor, whose company I-PAC is assisting Ms Banerjee in her bid to stop the BJP, said on Saturday that one of the key battles for democracy in the country will be fought in West Bengal, referring to the Assembly elections.

Shared the TMC's main slogan, "Bengal wants its daughter”, on Twitter, he reiterated the challenge he laid down to the BJP in December — that if the Opposition party crossed the double-digit mark he would "quit this space".

"One of the key battles for democracy in India will be fought in West Bengal, and the people of Bengal are ready with their message and determined to show the right card - #BanglaNijerMeyekeiChay (Bengal Only Wants its Own Daughter) PS: On 2nd May, hold me to my last tweet," he tweeted.

The BJP is going to the polls under Prime Minister Narendra Modi’s leadership as the state unit faces a leadership crisis to take on Ms Banerjee. Its leaders are often asked who will be the state’s chief minister to which the party top brass asserts that it will be a “son of the soil.”

The BJP, which has set an ambitious target of 200-plus Assembly seats, out of the total 294, is highlighting how the state under Mamata Banerjee-led TMC government is facing politicisation of the administration, criminalisation of politics and institutionalisation of corruption.

The party has gained massively since 2014, both organisationally and support base. It had won 18 out of total 42 seats in 2019 Lok Sabha polls, unsettling the TMC leadership and the ruling party has witnessed a major exodus of its leaders to the saffron camp.