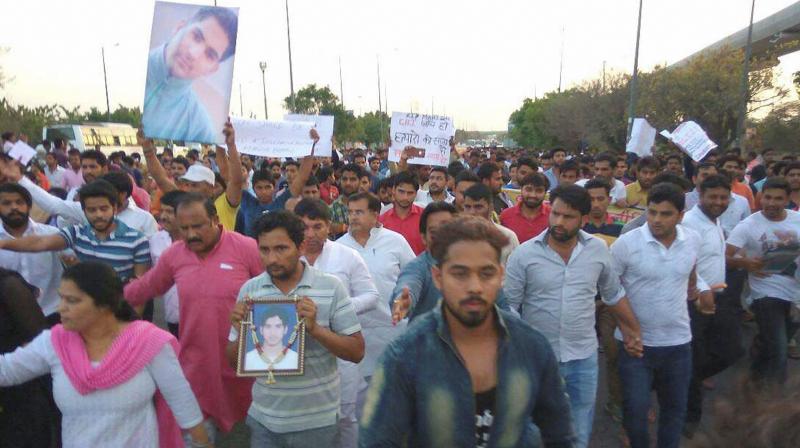 People holding a protest against African nationals over the death of a teenager alleged due to drug supplied by Nigerians, in Greater Noida on Monday. (Photo: PTI)

New Delhi: Terming the Greater Noida incident in which several people of Nigerian origin were injured as deplorable, External Affairs Ministry spokesman Gopal Baglay said that law enforcement authorities of the district have made arrests and are investigating this matter.

He said authorities are taking necessary steps to keep the situation under control.

Minister of State for External Affairs M J Akbar informed Nigerian envoy Sola Enikanolaiye about the steps being taken by local authorities for the safety and security of Nigerian nationals.

"The government is committed to ensuring safety and security of all foreigners in India. People from Africa, including students and youth, remain our valued partners," he said.

Earlier in the day, as many as five persons were arrested in connection with the assault on four Nigerian nationals in Greater Noida.

Swaraj had yesterday sought report from the Uttar Pradesh Government over the attack on four Nigerian students, who sustained severe injuries after being assaulted by a group of local residents in Greater Noida's Pari Chowk area.

The incident came as locals protested following the death of a Class 12 student in Greater Noida's NSG Black Cats Enclave due to suspected drug overdose and five Nigerian students living in the neighbourhood were booked - and later detained - in connection with the case.

The students were later released for lack of evidence.

Over 100 locals held a protest at the busy junction demanding that all Africans living in residential colonies in Greater Noida be asked to vacate their rented houses immediately.