He said the district administration will ensure that such incidents do not get repeated in the future and that harmony prevails. 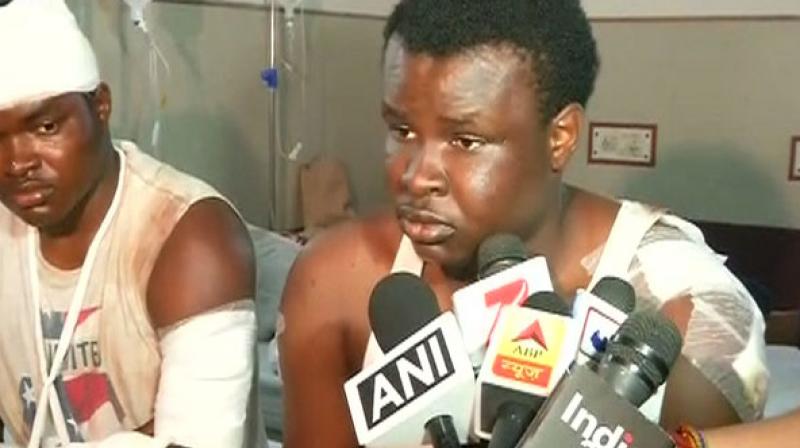 "It is absolutely not a hate crime, not is it some kind of anger against a race. A few people have spread rumours regarding the death of a youth which gave rise to anger. The incident happened in continuity of that," Singh claimed.

He said the district administration will ensure that such incidents do not get repeated in the future and that harmony prevails.

"We will not let the nation's image get hampered," he asserted.

The incident comes as locals protested following the death of a Class 12 student in Greater Noida's NSG Black Cats Enclave due to the suspected drug overdose and five Nigerian students living in the neighbourhood were booked - and later detained - in connection with the case.

The students were later released for lack of evidence.

Over 100 locals held a protest at the busy junction demanding that all Africans living in residential colonies in Greater Noida be asked to vacate their rented houses immediately.

"Nobody tried to assist us or tried to help. Earlier also in my society people used to say that we should leave this country. I have no words for people like this," said another Nigerian national.

"I think this is barbaric and highly racial motivated attack towards the African students in India. What has happened is false perception and false ideology about African people. We are accused of abductions and murder. It is a hate crime towards us. We are going to give a detail report and also in touch with the local African media so that we can give information," president of the Association of African students Samuel Jack said.

Meanwhile, as many as five persons were arrested in connection with the assault on four Nigerian nationals in Greater Noida.

External Affairs Minister Sushma Swaraj has said that she has spoken to Uttar Pradesh Chief Minister Yogi Adityanath about the attack on four Nigerian students in Greater Noida and he has assured fair and impartial probe into the matter.