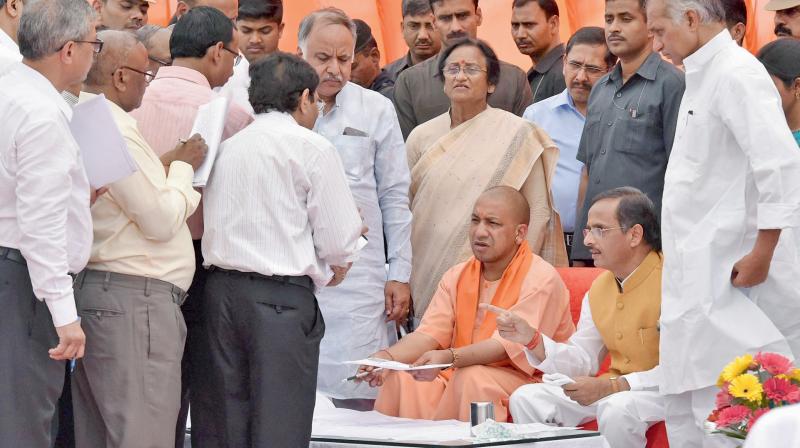 Lucknow: Uttar Pradesh chief minister Adityanath Yogi caught the bureaucracy unawares when he visited the Gomti riverfront project which was one of the most ambitious projects of Akhilesh government.

The chief minister, accompanied by about half a dozen Cabinet ministers, reached the Gomti riverfront minutes after the concerned officials and engineers were asked to reach the site.

Mr Adityanath, sources said, pulled up officers for poor maintenance and gross misuse of funds in the project because the drains from the city continue to pollute the river water.

The chief minister questioned the officials about the pollution in the river and asked them to fix responsibility for the same. He said that according to the files, de-silting of the river up to three metres had taken place. “Where was the silt dumped and what is the current depth of the Gomti river?” he asked.

The chief minister made it clear that he would not tolerate laxity in any projects and officials would be held accountable for lapses.

The Gomti riverfront has been developed along the river flowing from the centre of the state capital at an initial cost of Rs 1,513 crore while the total cost of the project is Rs 3,000 crore.

A diaphragm wall has been made on both banks of the Gomti River to channelise its water flow.

The land between the waterway and the embankment has been developed for public use with tracks for cycling, jogging and walking, apart from a play area for children.

Public conveniences like toilets, potable water taps and parking spaces have been provided at every 500 metres.

An artificial lake has been developed along with a musical fountain, an area reserved for doing yoga, a ground for weddings, and an amphitheater with a seating capacity of 2,000 are other attractions of the riverfront.

Under the project, the Hardinge Bridge, Gomti barrage, and Lohia Bridge have been illuminated with RGB lights, besides colored lights at the Gandhi Bridge.