All these are money bills, so RS can’t block them; debate on all four bills will be held together. 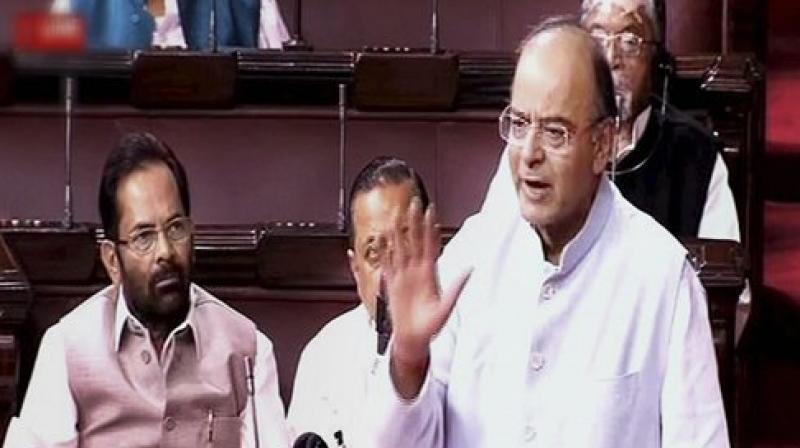 New Delhi: The government on Monday introduced four bills in the Lok Sabha which will help in the rollout of the landmark Goods and Services Tax across the country. The bills that were tabled will fix the maximum rate of GST at 40 per cent, besides ensuring the setting up of an anti-profiteering authority and arrests for evading taxes.

There were, however, loud protests from the Opposition which said it was not listed in the day’s House agenda. Countering this, minister of state for parliamentary affairs S.S. Ahluwalia said the bills were uploaded on the government’s website at midnight on Friday.

The Opposition MPs wondered how the government expected members to check the website at midnight and asked why the issue was not discussed at the meeting of the business advisory committee last week. Speaker Sumitra Mahajan, dismissed the Opposition objections, saying the bills were sent to the members on Saturday morning and there was nothing wrong in these being tabled.

GST, which has been touted as the biggest tax reform since Independence, has entered the last lap and its passage by Parliament will pave the way for integrating India as one tax country, wherein multiple state and Central levies would be replaced by a single tax.

The bills were introduced as money bills in the Lok Sabha, which means the Rajya Sabha can debate on them but its vote was not binding for their passage.

According to the statement of objects and reasons of the IGST Bill: “The Integrated Goods and Services Tax Bill provides for... tax on all inter-state supplies of goods and services or both, except supply of alcoholic liquor for human consumption at a rate to be notified not exceeding 40 per cent, as recommended by the GST Council”.

CGST provides for a maximum tax of 20 per cent. The actual rates will, however, be a four-tier tax structure of 5, 12, 18 and 28 per cent as approved by the GST Council.

The peak rate of 40 per cent is only an enabling provision for financial emergencies. He also introduced a separate Union Territory GST Bill will take care of taxation in UTs of Chandigarh, Andaman and Nicobar Islands, Lakshad-weep, Dadra and Nagar Haveli and Daman and Diu.

The third bill to be introduced was a bill on Integrated-GST which is to be levied and collected by the Centre on inter-state supply of goods and services.

The IGST law provides for a maximum tax of 40 per cent. Mr Jaitley also introduced a fourth legislation called GST (Compensation to States) Bill 2017, that provides for a mechanism for making good any loss of revenue of states from introduction of GST in first five years of rollout.

All the four bills will be taken up for discussion together.