The protestors pelted stones on the law enforcing personnel allegedly in a vain bid to help the holed up militant escape. 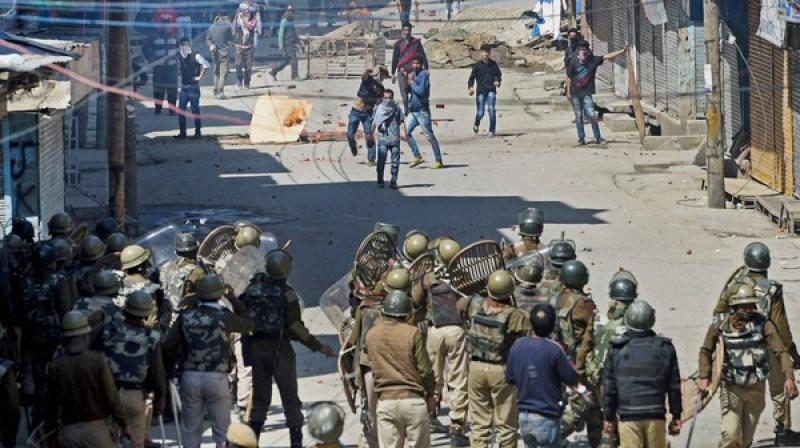 Srinagar: The Central Reserve Police Force (CRPF) has stated that Tuesday’s encounter with militants in Budgam was a particularly different one, as they had to fight it on two different levels – against militants and the stone pelting locals as well – informing that 40 CRPF and 20 Police personnel suffered injuries in the stone pelting.

Briefing ANI in Srinagar about the Budgam encounter, CRPF Deputy Inspector General (DIG) Dr. Sanjay Kumar said that the obstruction by the locals made their operation even more difficult, as they were forced to divert their attention from the militants.

Three civilians – all young men in their twenties – were killed while 18 others were injured in security forces' action against a large number of protestors who pelted stones on the law enforcing personnel allegedly in a vain bid to help the holed up militant escape.

"The operation was really difficult because, we had to fight it on two different platforms. One was against the militants and other was the local people. Out of them, few people really made our day difficult. Lot of commotions, stone pelting, abusing and injuring our people, this made the operation really difficult," Kumar said.

Further informing that 43 CRPF jawans were injured and police reported that 20 of their men were injured in the stone pelting today, the DIG called on the locals of the Valley to steer clear of their operations and not pose as an obstruction.

Three stone pelters were killed in retaliatory firing by security forces near the site of the Budgam encounter in Jammu and Kashmir.

The stone pelters could be seen attacking the forces while a gunbattle was underway with terrorists, during which they were killed.

At least 17 stone pelters have been injured in the firing by forces and a militant was neutralised.

The security forces had launched a search operation following a tipoff about the presence of terrorists, which then became an encounter.

Earlier, the army had warned stone pelters against helping terrorists flee from the security forces

Army Chief General Bipin Rawat had said that those who disrupt operations during encounters and are not supportive will be treated as 'overground workers of terrorists'.

People creating hurdles during anti-terror operations and displaying flags of Pakistan and ISIS in Jammu and Kashmir will be dealt as anti-nationals and will face "harsh" actions, the Army Chief said.

Meanwhile, the Supreme Court has asked the Centre to explore an alternative to pellet guns to control protesters in Kashmir and also take action against parents of minors used as shields by militants during attacks on security forces.