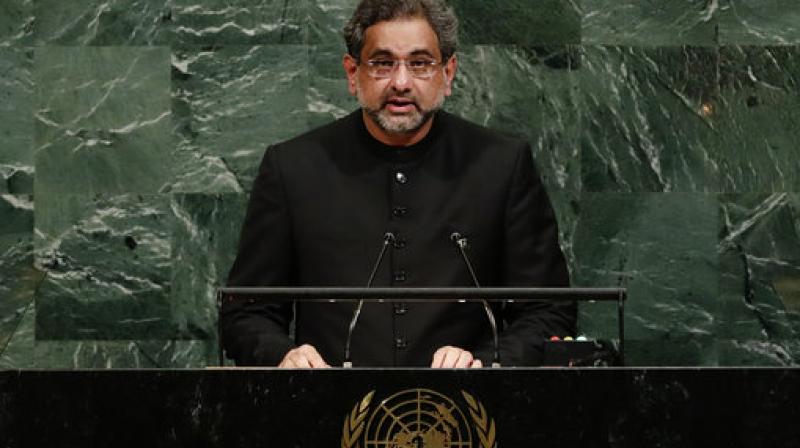 Pakistani Prime Minister Shahid Khaqan Abbasi was reportedly on a private visit to meet his ailing sister in the US. (Photo: File | AP)

New Delhi: Pakistan Prime Minister Shahid Khaqan Abbasi was abased down to any regular person at the John F Kennedy airport in New York, as viral videos on Youtube show Abbasi being frisked during the security procedure.

Ditching official customs as a visiting dignitary, that too as a Prime Minister of a nuclear-armed nation, Abbasi, who reportedly was on a private visit to meet his ailing sister in the US, can be seen in the video adjusting his t-shirt after getting out of security checks with his jacket and a trolley bag.

Abbasi, however, has a history of making private trips to foreign nations, as according to Pakistani TV news channel Geo News, the PM was previously spotted travelling alone at a train station during his visit to Britain.

This comes at a time when Pakistan-USA relations have been strained lately, especially since US President Donald Trump tweeted, "The United States has foolishly given Pakistan more than 33 billion dollars in aid over the last 15 years, and they have given us nothing but lies & deceit, thinking of our leaders as fools. They give safe haven to the terrorists we hunt in Afghanistan, with little help. No more!"

Earlier this month, Vice-President Mike Pence told Abbasi that Pakistan "must do more" against the Taliban and other militants.

"Vice President Pence reiterated President (Donald) Trump's request that the Government of Pakistan must do more to address the continued presence of the Taliban, Haqqani Network, and other terrorist groups operating in their country," the White House said in a statement.