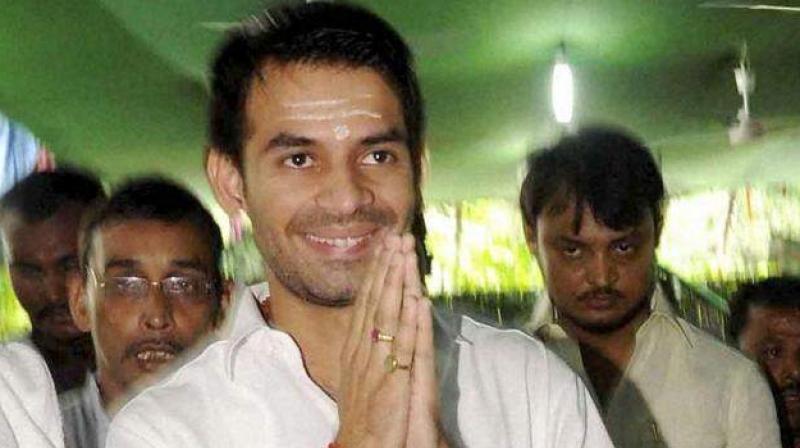 Tej announced his decision through a tweet on Thursday. (Photo: PTI)

More than the political temperature it was a wave of shock and surprise for the RJD and entire Lalu clan when he announced his decision through a tweet on Thursday.

“I am resigning from the post of party’s student wing. Those who think that I am a fool are foolish. I know their reality”, Tej Pratap said in a tweet.

Sources said Tej Pratap was upset after party leadership rejected his demand to accommodate two candidates in Bihar for the upcoming Lok Sabha elections. Earlier in the day, Tej Pratap had announced candidature of Angesh Singh from Sheohar and Chandra Prakash for Jehanabad seats.

“I just wanted the party to accommodate these two leaders who have worked hard to strengthen RJD at the ground level. But the party is planning to include those workers who are less deserving and cannot ensure victory in the Lok Sabha elections”, Tej Pratap Yadav said.

Adding further he said that “Lalu Yadav is not being informed about day to day development of the party. But I am aware of all these things and they cannot fool me”.

RJD insiders, however, downplayed the statement by Tej Pratap and said that “he has been creating trouble for Tejashwi Yadav who is trying to run the party smoothly in the absence of his father Lalu Yadav”.

Political observers see Tej Pratap Yadav’s latest move as a tactic to build pressure on the RJD ahead of candidate announcement for 2019 general elections.

The dissent in the RJD has been brewing since Lalu Yadav handed over reins of the party to his younger son Tejashwi Yadav after he was convicted and sent to jail in the fodder scam case.

Sources said that fresh speculation of a rift between Tej Pratap and other leaders including his brother Tejashwi Yadav has confused party workers.

His statement also gave fuel to NDA leaders in Bihar who said that the rift within Lalu Yadav’s family will create a conflict in the party as well as in the grand alliance.

This is not his first controversial tweet. Last year he created a buzz with a tweet signalling his retirement from politics. In a social media post, he had used references from Mahabharata and said that he wishes to hand over the throne to Arjun (Tejashwi Yadav) and leave for Dwarika.