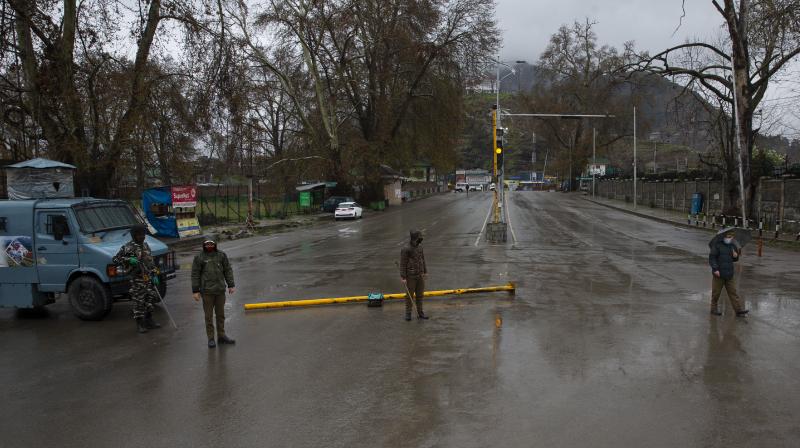 Police and paramilitary soldiers stand guard on a road leading to the Jawaharlal Nehru Memorial Hospital in Srinagar, where most patients with symptoms of COVID-19 are being kept in quarantine. (AP)

Srinagar: As many as 26 Covid-19 suspects jumped quarantine at a Srinagar hospital amidst chaos triggered by a violent protest over poor medical facilities.

The protesters allegedly broke furniture and window panes in the government-run Jawaharlal Nehru Memorial Hospital in the Rainawari area of Srinagar and were joined in the riot by their relatives who had been waiting outside.

However, Srinagar’s DC Shahid Iqbal Choudhary said all the quarantine fugitives were quickly traced and brought back to the hospital with the help of the police.

Later in the day, the authorities sacked a doctor and suspended another for negligence. In an order served on microbiologist Dr. Mariaya Jeelani, the Directorate of Health Services (Kashmir) said, “You were asked to attend your duties immediately, keeping in view the prevailing disaster, the COVID-19 outbreak in Valley, which you failed to comply with and it created lot of inconvenience to the patients and hospital administration. Hence your contractual services hired as Microbiologist are hereby terminated with immediate effect.”

Another doctor, identified as Safina Gul, has been put under suspension, pending inquiry into her conduct, official sources said.

Meanwhile, police arrested nearly 400 people, seized 600 vehicles and sealed dozens of shops for allegedly violating the coronavirus lockdown in force since March 19.  Among those arrested are two imams who were found delivering Friday sermons at mosques in Ganderbal and Shopian districts۔ Police chief Dilbag Singh said as many as 329 FIRs were registered against lockdown violators till Friday evening.

Reports from Srinagar said police and personnel of other law enforcement agencies thrashed or misbehaved with dozens of people found out of their homes over the past few days. Videos and photographs of some of these incidents have gone viral on social media.