State DGP Praveen Sood has ordered inquiry into the incident, which has triggered a row after a video of it went viral 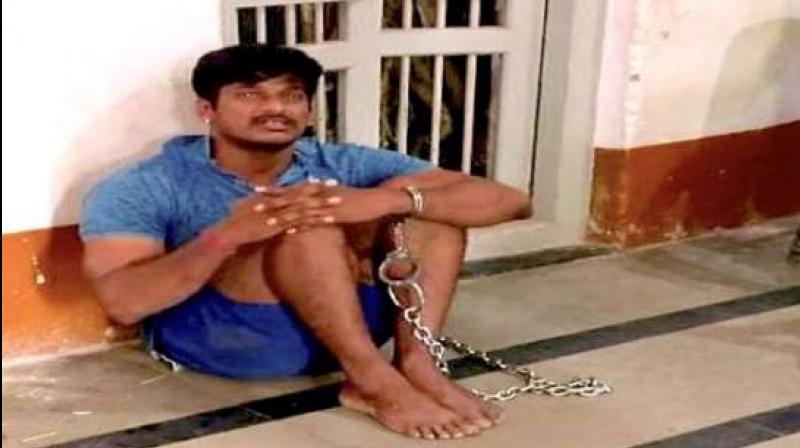 A CRPF jawan has been arrested in Karnataka for allegedly defying the COVID-19 lockdown norms. (Photo- ANI)

Bengaluru: A CRPF jawan has been arrested in Karnataka for allegedly defying the COVID-19 lockdown norms with the paramilitary force taking strong exception to his 'ill treatment', following which an inquiry has been ordered by the state police.

State DGP Praveen Sood has ordered inquiry into the incident, which has triggered a row after a video of it went viral.

In the clip, some police constables are purportedly seen hitting CRPF soldier Sachin Sawant with sticks in Belagavi.

According to the information shared on social media, Sawant was washing his bike when a police team reached the spot and started beating him up for not wearing a mask during the lockdown.

Taking a serious view of the 'ill-treatment' meted out to its Cobra Commando, the CRPF has written a letter to the Karnataka police demanding an investigation into the matter.

In a letter to the DGP of Karnataka, the additional Director general of police of CRPF Sanjay Arora said Sawant was cleaning his bike when a skirmish happened between him and the police over not wearing the mask.

Arora wrote, "Sawant was manhandled and ill-treated, before his family members and paraded to the police station barefoot, where he was kept in chains and handcuff.

From the scrutiny of a viral video on social media, it is apparent that the conduct of police personnel was not citizen centric."

The CRPF ADGP also said the 'unpleasant' situation could have been avoided if the Karnataka police had taken CRPF hierarchy into confidence before making the arrest.

In response, Sood ordered an inquiry into the matter.

He tweeted that IGP Belagavi has been asked to conduct a probe into the incident involving CRPF constable. Action will be taken against guilty after receipt of report, he said.

According to sources, Home Minister Basavaraj Bommai has directed the state police chief to conduct a detailed inquiry into the incident.

Denouncing the arrest, Karnataka Irrigation Minister Ramesh Jarkiholi has sought the release of the CRPF jawan.

"It was wrong on the part of the constables to ill treat CRPF jawan and an inquiry be conducted against the erring policemen," said jarkiholi in a press release.

However, Superintendent of Police of Belagavi district, Laxman Nimbargi defended the arrest of Sawant.