Dissent: You agree, I agree; You disagree, I shut you down!

All the names on the lists were of women, and women who subscribe to a different ideology from the BJP’s ‘nationalist’ one. 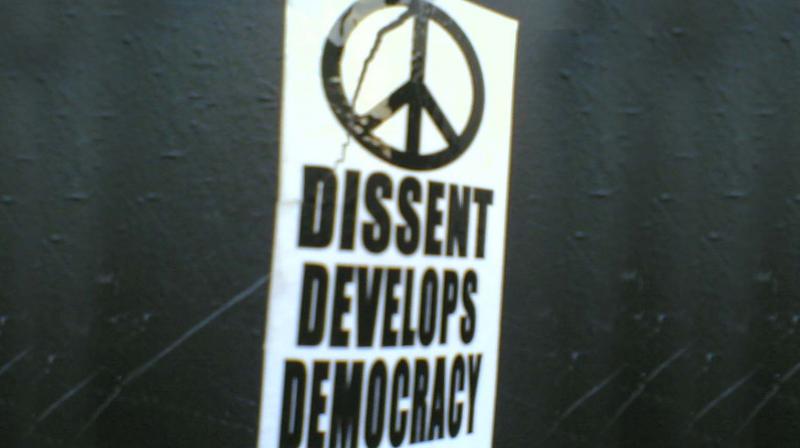 My question came purely from a concern for where this prime time debating culture will lead by logical progression (“are mobs right to lynch?” and “are men right to rape in retaliation?”) in normalising violence in society.

As the controversy over Major Gogoi’s use of a Kashmiri as a “human shield” raged, BJP parliamentarian Paresh Rawal fanned the flames in a different  direction, but towards a familiar target, with his unprovoked tweet that the Army should tie up writer and activist Arundhati Roy to a jeep and parade her, instead. This, when Roy had made no comment on the Gogoi matter at all. And as is the 'norm' today, right-wing vultures gathered around the liberal meat, and lists came up immediately on which other prominent dissenters deserved such treatment. Curiously, all the names on the lists were of women, and women who subscribe to a different ideology from the BJP’s ‘nationalist’ one.

Coincidence that all on the list were women? Not if you go by the typical Violence Against Women (VAW) culture — whether it is in conflict zones in medieval times where women were pulled out to be raped as a lesson to the conquered enemy, or in the present, when instances of rape, murder and acid attacks as acts of revenge continue to be commonplace, the latest being the unspeakably brutal gang rape, torture and murder of a woman in Haryana for rejecting one of the perpetrators advances.

The Army Majors decision to use a civilian human shield in Kashmir is controversial because there are two opposing views. Primarily, the debate boils down to this — one argument is, it is a violation of an international code of ethics and sets a dangerous precedent if the army backs it; the other argument is that the army is allowed to gauge situations in conflict zones and bend the rules if it saves lives or is in the interest of the nation at that moment. Code of ethics vs law and order, therefore, is at the crux of this debate.

Rawals bizarre comment was not about such a debate, the act he suggests comes solely from a place of humiliation — tying up Roy, and as proposed, other women (a list Rawal backed by tweeting “there are many options” to one suggestion) to a state vehicle and having them paraded through villages as a lesson to all dissenters.

Therefore, when an English TV channel anchor announced on Twitter that the debate of the evening was whether  Rawal was right in his “proposal”, a number of people, including me, expressed horror that this should even be seen as a question to debate.

The next day, I saw tweets from the anchor thanking a leading feminist intellectual for agreeing to come on the “debate” where others (feminists) had dared not tread. This seemed to me a wrong signal to send out on the subject of VAW, that it was a matter of debate. I posed this question to the liberal feminist intellectual: “do you think by agreeing to debate this (as opposed to unequivocal condemnation) you reduce VAW to a debate?”She replied that her performance on the show was absolutely ace and she had totally shut down a BJP spokie, and offered I hear her. I argued that I had no doubt her counter was technically superb, its just the topic of debate itself I had issues with. She told me I was missing the point. I said no, I was just making a different point. When I persisted, she tweeted to me, inexplicably, “I don’t know where you’re coming from but you’re on your own.”

Really? On the TV debate, the liberal bragged she had shut down a fellow panelist, who had only taken advantage of the chance that the journalist and the feminist had afforded to make VAW, and Paresh Rawal’s particularly unacceptable suggestion, a matter of debate. Now on Twitter, the liberal was shutting me down because I did not agree with her decision to accept it as a topic of debate.

This seems to me a version of Paresh Rawal’s threat, albeit definitely less violent and crude, to Arundhati Roy — an attack simply because I seem to dissent from her view on tackling VAW.

Is this what we have become as a society? Is this what we do to people who disagree with us, even when, as in my case, the disagreement is over means, not ends — simply shut them down? Should our Democracy be simply an unending contest between one echo-chamber on the Right and another on the Left? Or, is there space for nuance and negotiation?