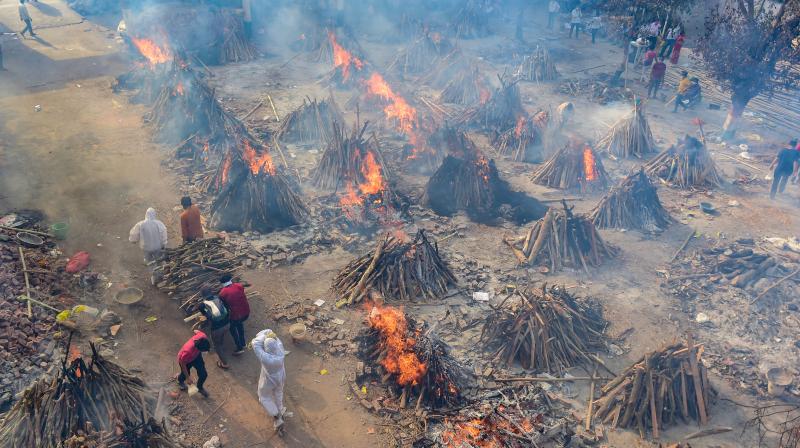 Mass cremation of people who died of Covid-19 coronavirus at a cremation ground at Ghazipur, in New Delhi. (Photo: PTI)

New Delhi: The Delhi High Court on Friday asked the Centre and the Delhi government to respond to a PIL seeking more electric or CNG crematoriums in the national capital in view of the large number of people succumbing to COVID-19.

A bench of Chief Justice D N Patel and Justice Jyoti Singh issued notices to the Centre, the Delhi government and the municipal corporations, seeking their responses to the plea filed by social activist Sunil Kumar Aledia.

Aledia, in his petition filed through advocate Kamlesh Kumar Mishra, has also sought directions to the authorities to fix uniform charges for cremation at electric crematoriums in the city, as according to the petitioner, the rates range from Rs 500 -- at Sarai Kale Khan -- to Rs 8,800 -- at Lodhi Road.

The petition has also sought a centralised online facility for issuance of death certificates so that people need not travel physically to the local authorities to register deaths.

It has also sought that the authorities repair the non-functional electric crematoriums.