Cong accused Centre of 'step-motherly treatment' to armed forces by not providing state-of-the-art equipment to them. 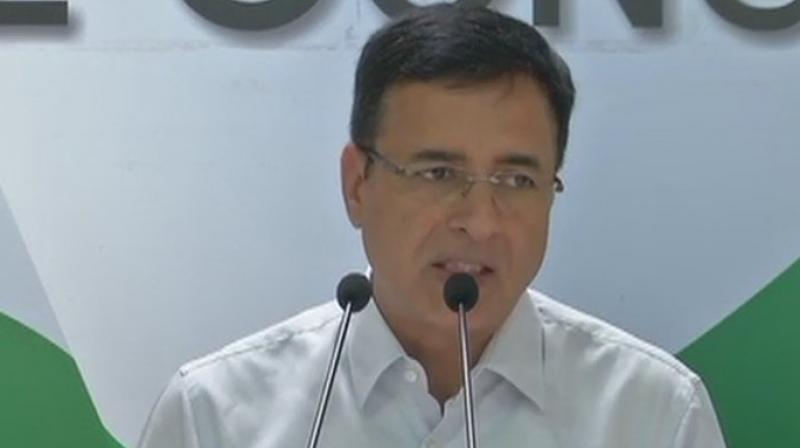 Congress spokesperson Randeep Surjewala said 'apathy' and 'incapacity' of Modi government has resulted in sacrifice of 146 soldiers, more than 1,600 ceasefire violations by Pakistan and 79 terrorist attacks since September 2016. (Photo: ANI/Twitter)

New Delhi: The Congress today accused the Modi government and the BJP of politicising the September 2016 surgical strikes after a video of it was reportedly released.

The Congress said that the blood and sacrifice of the country's brave soldiers cannot be used a political tool to garner votes.

Addressing a press conference, Congress spokesperson Randeep Surjewala claimed that while on the one hand the Modi government is seeking credit for the sacrifice and valour of the armed forces, on the other it has failed to provide direction and vision to deal with Pakistan.

He also accused the Modi government of meting out "step-motherly treatment" to the armed forces by not providing them with state-of-the-art equipment and slashing their budgetary allocation.

"Let the ruling dispensation remember that the blood and sacrifice of our brave soldiers cannot become a political vote garnering tool for the Modi Government and the BJP," he told reporters, alleging that the surgical strikes of September 28 and 29, 2016 were "shamelessly politicised" by the BJP for the March 2017 Uttar Pradesh Assembly elections.

"On the one hand, the Modi Government and BJP indulge in seeking credit for the sacrifice of our soldiers and surgical strikes, yet the Government has utterly failed to provide the direction, the vision and the policy for dealing with Pakistan and checkmating Pak-sponsored terrorism," he charged.

Surjewala said the "apathy" and "incapacity" of the Modi Government has resulted in the sacrifice of 146 soldiers, more than 1,600 ceasefire violations by Pakistan and 79 terrorist attacks since September 2016.

"The doublespeak of the Modi government and the BJP stands is reflected in the step motherly treatment of our armed forces, both in terms of providing for security apparatus as also in slashing the budgetary allocation. Vice Chief of Army Staff Lt Gen. Sarath Chand, was forced to publicly state that 68 per cent of all equipment is 'vintage'," he said.

Hailing the indomitable courage, fortitude and spirit of sacrifice of the armed forces, he said the Congress has unequivocally supported them as well as the government for conducting surgical strikes against terrorists and for taking all steps for demolishing the terror infrastructure in Pakistan and Pakistan-occupied Kashmir.

"As the Modi Government seeks to politicise the bravery of our soldiers and their determination in conducting the surgical strikes through 'headline management', the Nation demands answers."

Surjewala also asked whether former prime ministers Atal Bihari Vajpayee and Manmohan Singh were wrong when they used surgical strikes for strategic and security purposes without any chest thumping.

By making public the videos of the strikes, has the government not somehow endangered lives of armed forces participating in them as also civilians living along the Line of Control, he asked.