He also told Lok Sabha that Article 370 of the Constitution, is 'temporary in nature' and 'not permanent'. 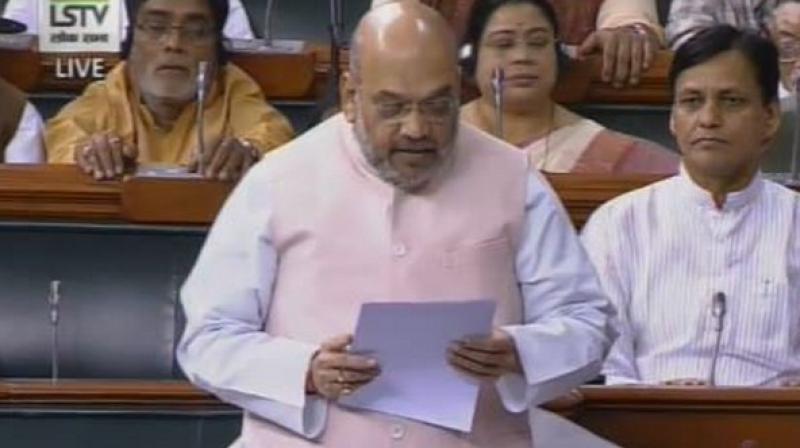 The Lok Sabha also cleared the Jammu and Kashmir Reservation (Amendment) Bill, 2019, to replace an ordinance issued by the previous government. (Photo: ANI)

New Delhi: Lok Sabha on Friday gave its nod to extend President's Rule in Jammu and Kashmir for another six months beginning July 3, with Home Minister Amit Shah asserting that assembly elections in the state will be held in a democratic, free and fair manner as soon as the Election Commission announces the dates.

He also told Lok Sabha that Article 370 of the Constitution which extends special status to Jammu and Kashmir, is "temporary in nature" and "not permanent".

The Lok Sabha also cleared the Jammu and Kashmir Reservation (Amendment) Bill, 2019, to replace an ordinance issued by the previous government.

People living along the International Border (IB) in Jammu and Kashmir will get benefits of reservation in direct recruitment, promotion and admission in professional courses on par with those living along the Actual Line of Control (ALoC), according to the bill. Replying to the statutory resolution seeking extension of President's Rule in the state, and the amendment bill, Shah asserted that the Modi government has 'zero tolerance' policy towards terrorism and its ideology is to ensure protection of borders and make the country free of terrorism.

He said the government has spent Rs 2,307 crore to upgrade security apparatus in the state. Hitting out at the Congress and the then prime minister Jawaharlal Nehru, he said one-third of Jammu and Kashmir is not with India. "Who is responsible," he asked drawing a sharp reaction from the Congress members. The House witnessed disruptions over Shah naming Nehru.

Continuing his attack on the opposition party, he said so far Article 356 (President's Rule) was imposed 132 times all over the country, of which the Congress used it 93 times to dismiss state governments.

The legislative proposals were the first ones to be piloted by Shah as Home Minister.

The Home Minister also said the government withdrew security of 919 people in the state as there was no security threat for them. Shah said people speak against India in Jammu and Kashmir to get security cover. In fact, he said, people who speak for India face the real threat.