BJP has 109 MLAs and appeared confident of pulling down the Kamal Nath government at the “slightest hint” from the Central leadership of party. 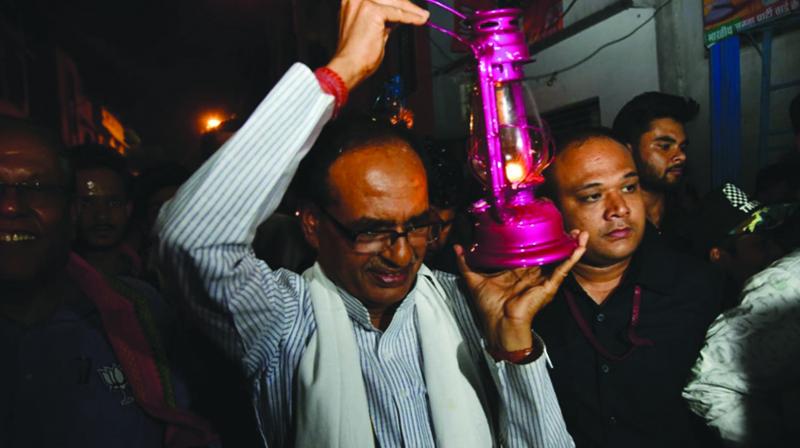 Bhopal: Amid talks of a move by the saffron leadership to shift him to Delhi, former chief minister and BJP national vice-president Shivraj Singh Chouhan has intensified his campaign against the Kamal Nath government, sending a signal that he was not in a mood to move out of Madhya Pradesh.

Mr Chouhan who has so far been able to deflect the pressure by the Central leadership of the BJP to move him to Delhi, appeared to have launched last-ditch efforts to stay in state politics in the wake of party giving him a new assignment in the national membership drive.

His rivals in the BJP have interpreted the development as a signal by the party leadership in clear terms that he has a role to play at the national level.

“By giving the assignment, the party leadership has sent a clear message to him that it was time for him to move out of MP and play a national role,” a senior BJP leader who was unwilling to be quoted, said.

Mr Chouhan’s followers in the BJP have however sought to project the development as his “growth in stature” in the party, even as the former chief minister put up a brave front saying that he could carry out his “additional responsibility” given by the party “competently” in addition to taking up issues of people in MP.

“I can accomplish duel responsibilities competently,” he has said.

In fact, Mr Chouhan has held a video conference here to interact with leaderships of state units of the party to launch the membership drive at the national level, indicating that the new assignment may not necessarily keep him out of MP politics.

The very next day, he hit the streets to protest against unscheduled power cuts in the state.

The three-term chief minister Mr Chouhan’s common refrain in the aftermath of 2018 Assembly elections that put him out of power in MP, is that “People of MP love their ‘Mama’ (he likes to identify himself as such). I want to serve people of the state till my last breath”.

Mr Chouhan had set out on “thanksgiving” yatra to “reconnect” with people across the state barely a week after the BJP lost power to the Congress in MP in November last year, apparently to demonstrate that he was still a mass leader and enjoyed a TINA factor (There Is No Alternative) in the state party.

Intervention by the party leadership had led to suspension of his “political” programme.

A stupendous show by the party in MP in the recently held Lok Sabha elections has weakened the positions of regional satraps of the BJP, including Mr Chouhan, thus hanging his political fate in the balance, another senior leader of the party observed.

His “insistence” to lead party in the state despite loss of power by the party in the last Assembly elections has given birth to infighting in the BJP here with senior leaders such as BJP national general secretary Kailash Vijayvargiya, state party president Rakesh Singh and BJP legislature party leader Gopal Bhargav, considered his arch rivals, were hardly seen together on a common platform after the Lok Sabha elections.

The fissures in BJP here came to the fore last month when Mr Chouhan openly opposed a move by Mr Bhargav to convene a special session of Assembly for making the Kamal Nath government face a floor test.

The ruling Congress, which has strength of 114 in the 230-member MP Assembly, enjoyed a wafer-thin majority in the House, and formed government with outside support from two Bahujan Samaj Party (BSP) MLAs, lone Samajwadi Party (SP) legislator and three Independents.

BJP has 109 MLAs and appeared confident of pulling down the Kamal Nath government at the “slightest hint” from the Central leadership of party.

Curiously, recent developments in which sons of Mr Chouhan’s rival leaders were caught in unsavoury controversies have come as a “blessing in disguise” for him to strengthen the TINA factor in his favour.

While Union minister Prallhad Patel’s son has been booked under attempt to murder charge following a shootout incident allegedly involving the junior Patel, son of another BJP leader Kamal Patel, considered one of Mr Chouhan’s potential options, has also been booked in a serious criminal case.

However, the Union minister and the BJP leader cried political vendetta accusing the Kamal Nath government of implicating their sons for ulterior motive.

On June 26, BJP national general secretary Kailash Vijayvargiya’s MLA son Akash was caught in a video assaulting employees of local municipal body in Indore city in MP, causing much embarrassment to his father, whose stock has risen in the BJP after party’s “amazing” growth in West Bengal under his stewardship.

The incidents have threatened to damage prospects of these leaders to emerge as alternative to Mr Chouhan in MP, yielding a political gain for Mr Chouhan ultimately in the ongoing leadership tussle in MP, sources predicted.