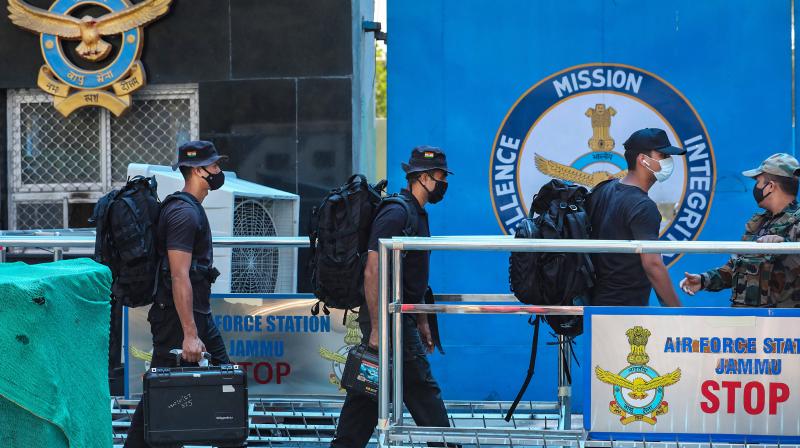 SRINAGAR: Seen as a major security lapse, the disquieting twin blasts in the highly-sensitive Air Force Station (AFS) at Jammu are likely to be investigated by the National Investigation Agency (NIA). The Indian Air Force (IAF) has with the help of forensic experts has begun an internal probe into the incident that took place overnight, leaving two personnel with minor injuries and a barracks marginally damaged.

Soon after hearing about the incidents, a team of NIA rushed to the spot for the initial evidence gathering, the sources said.

The IAF and J&K police sources in Jammu said that two explosions, within a gap of five minutes, rocked the high-security technical area of Air Force Station (AFS) on the outskirts of Jammu the intervening night of June 26-27, causing minor damage to a barracks. Though Jammu-based defence spokesperson Lt Col Davendra Anand claimed that there was no injury to any personnel or any damage to equipment, sources said that two IAF personnel had received minor injuries.

The first blast occurred at 1.37 am and the second one at 1.42 am. The IAF tweeted, “Two low intensity explosions were reported early Sunday morning in the technical area of Jammu Air Force Station. One caused minor damage to the roof of a building while the other exploded in an open area. There was no damage to any equipment. Investigation is in progress along with civil agencies.”

Officials said that most probably drones were used for dropping bombs, but the investigators are also examining the possible ‘sabotage from within’ angle. Sources said that the possible target of the act was the aircraft parked in the dispersal area.

A defence official who spoke to this newspaper on the condition of anonymity said, "The perpetrators may have failed to inflict fatalities or major damage to aircraft or equipment, it is a serious lapse which needs serious action."

Defence minister Rajnath Singh, before leaving for Leh on a three-day visit of Ladakh, spoke to Vice Air Chief Air Marshal Harjit Singh Arora regarding the explosions. A report said that Air Chief Marshal Rakesh Kumar Singh Bhadauria who is on a three-day visit to Bangladesh will soon reach Jammu for an on-the-spot assessment of the situation.

Soon after the blasts, a security alert was issued for all airports, air stations and vital installations across J&K and Ladakh. Also, tight vigil is being maintained near key installations in Pathankot in neighbouring Punjab. On January 2, 2016, a terror attack was carried out by a heavily armed group at the Pathankot AFS which is part of the Western Air Command of the IAF, leaving five attackers and six security personnel dead.

The sources and witnessed said that while a team of IAF officials along with forensic experts and a bomb disposal squad reached the scene of occurrence within the AFS Jammu immediately, those of the NIA and J&K police which has registered an FIR under the Unlawful Activities (Prevention) Act (UAPA) in the case and also officials of Central intelligence agencies were seen entering the premises at first light. Simultaneously, a massive search operation was launched outside the AFS. Media persons were not allowed to walk beyond the main entrance to the station "for security reasons."

The sources said that a team of the National Security Guard (NSG), the elite counter-terrorism unit under the Union home ministry, is also reaching the AFS.

The incident did not affect routine flight operations from the Jammu Airport, the officials said. The airport is manned by the IAF in Satwari of Jammu. "All flight operations were normal and as many as 16 flights scheduled for the day operated between Jammu and Delhi, Srinagar, Leh and Gwalior. Only two flights, G8 185 and SG 963, were cancelled for the day due to operational reasons,",said Jammu Airport director Pravat Ranjan Beuria.

Sources and that while the security agencies are looking into whether drones were used to drop an IED payload inside the AFS, located just 14 km from the India-Pakistan border, to trigger the blasts. They said that weapons and narcotic drugs have been dropped as far as 12 km inside Indian territory using drones in the recent past.