It is unfortunate Amma is not here today, laments Modi. 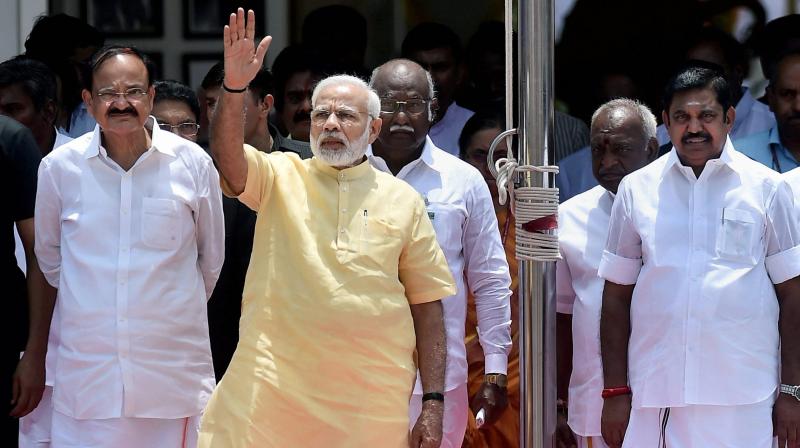 Rameswaram: Prime Minister Narendra Modi on Thursday dedicated to the nation the grand memorial for Dr A.P.J. Abdul Kalam built at the place where the People’s President was laid to rest at his native place by the mourning family and thousands of grieving admirers this day two years ago. PM Modi cut the ribbon and offered flowers at the tomb along with vice-president nominee Venkaiah Naidu, governor Ch Vidyasagar Rao and TN chief minister Edappadi K. Palaniswami, besides other dignitaries.

With the completion of the monument, built by DRDO where Kalam had spent most of his pre-Rashtrapati years spurring India into the space age and investing it with missile technology, temple town Rameswaram would now be the destination for “deep spiritual knowledge”, the Prime Minister later told a large rally a couple of kms across the Pamban bridge — the longest Marine motorway bridge (about 2.5 km) in the countr.

Knitting together Kalam and the divinely serene Rameswaram, PM said, “Kalam had always reflected the simplicity and deep calmness of Rameswaram. Coming to Rameswaram today is very fortunate for me”. He recalled that his government had taken the decision to build the Kalam memorial last year and said, “I am so happy this promise has been fulfilled”.

Regretting that Jayalalithaa was not alive to see the memorial come up, PM Modi said had she been present there, she would have appreciated the hard labour of the workers who did extra two hours every day, without demanding additional wages. “If Amma were to be here, she would have appreciated and blessed the workers for their sacrifice. It is unfortunate she is not here. Even now she will continue to bless Tamil Nadu”.