Heavy rains wreak havoc across UP, 10 are killed 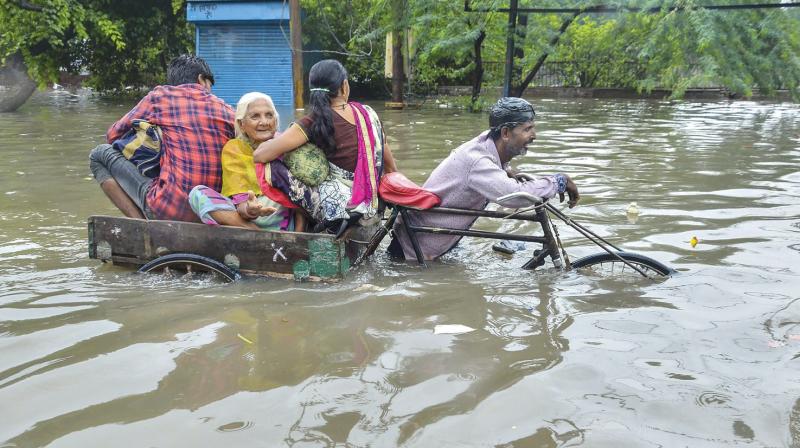 A rickshaw puller ferries passengers through a water-logged street during heavy rain in Mathura on Friday. (Photo: PTI)

Lucknow: Incessant rains in various parts of the state have wreaked havoc in the past 48 hours in Uttar Pradesh.

According to the official spokesman, nine persons have died in Mainpuri, Mathura and Agra in incidents of house collapse while one person was electrocuted in Ghaziabad.

There have been innumerable incidents of building collapses in the rural areas.

Chief minister Yogi Adityanath has directed officials to undertake rescue and relief operations on a war footing and ensure that due compensation is given to the flood victims at the earliest.

According to reports reaching here, a house collapsed in Mubarakpur in Azamgarh whereas the wall of a school also caved in due to water logging.

Five persons were injured in rain related incidents in Shamli district and rail traffic was disrupted due to flooding of an underpass.

In Allahabad, several arterial roads have caved in and the ongoing work at the Kumbh Mela township has also been adversely affected.

The Ghaghra is flowing 13 centimeters above the danger mark at Elgin bridge in Bahraich while several village sin Sitapur districts have been flooded.