The Prime Minister said that terrorism and proxy war pose a threat to the entire world today. 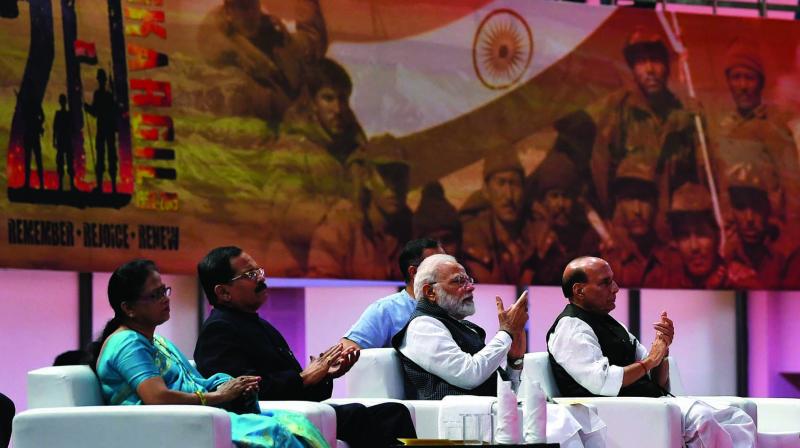 New Delhi: Marking the 20th anniversary of Kargil war, Prime minister Narendra Modi on Saturday said that those who were defeated in war are resorting to proxy war and terrorism to achieve their political objectives and that time has come for united global efforts to deal with it.

Hitting out at Pakistan, Prime Minister said that victory in the Kargil war was a symbol of India’s might and its security will remain impregnable with dedication of the armed forces.

Mr Modi said Pakistan has repeatedly resorted to deceit in Kashmir since 1948. “We did not allow them to succeed in 1999 either,” Mr Modi said.

“Kargil victory was symbol of India’s might, determination and capability,” the Prime minister said in his address at the event, which was attended by a large number of military personnel and ex-servicemen.

The Prime Minister said that terrorism and proxy war pose a threat to the entire world today.

He said that the need of the hour is for all those who believe in humanity to stand in support of the armed forces. He said this was essential to effectively counter terrorism.

Emphasising that conflicts have reached space and the cyber world, Mr Modi added that the armed forces must be modernised. He said that when it comes to national security, India will not bow to pressure or be found wanting in any manner. In this context, he mentioned the establishment of India’s nuclear triad through Arihant and the testing of A-Sat — the anti-satellite test. He said the armed forces are being rapidly modernised and efforts were being made to increase the participation of the private sector for “Make in India” in the defence sector. He stressed on the importance of “jointness” among the three wings of the armed forces.

Reminding the country of its pluralism, Prime Minister said that it was the entire nation that won freedom in 1947 not just one community, caste or people who spoke one language. He said it was the entire nation for which the Constitution was written in 1950 and it was for the entire country that more than 500 brave soldiers laid down their lives in the snowy heights of Kargil. He called for a collective resolve to ensure that these sacrifices do not go in vain.

Mr Modi said that he had visited Kargil just a few months after assuming office in 2014. He also recalled that he had visited Kargil 20 years ago when the war was at its peak. Recalling the valour of the jawans in Kargil, he said that the entire country stood together with the soldiers. “Youth were donating blood and even children were donating their pocket money for the soldiers,” Mr Modi said.

He recalled that the then Prime Minister Atal Behari Vajpayee had said that we would be failing in our duty towards our motherland if we cannot care for our soldiers throughout their lives. He said that in the last five years, the Union government has taken a number of decisions for the welfare of soldiers and their families, including “One Rank, One Pension”, enhanced scholarship for wards of martyrs and the National War Memorial.

The Prime Minister asserted that India has never been an aggressor in history. He said that the Indian armed forces are perceived as defenders of humanity and peace across the world. He recalled the liberation of Haifa in Israel by Indian soldiers and the memorial in France for the Indian soldiers who laid down their lives during World War 1. He said over a lakh Indian soldiers were martyred during the World Wars and even in UN peacekeeping missions, it is Indian soldiers who have made the supreme sacrifice in the highest number. He also mentioned the dedication and service of the armed forces in natural calamities.