The video sparked an outrage among people with many criticising the family for shaming India abroad. 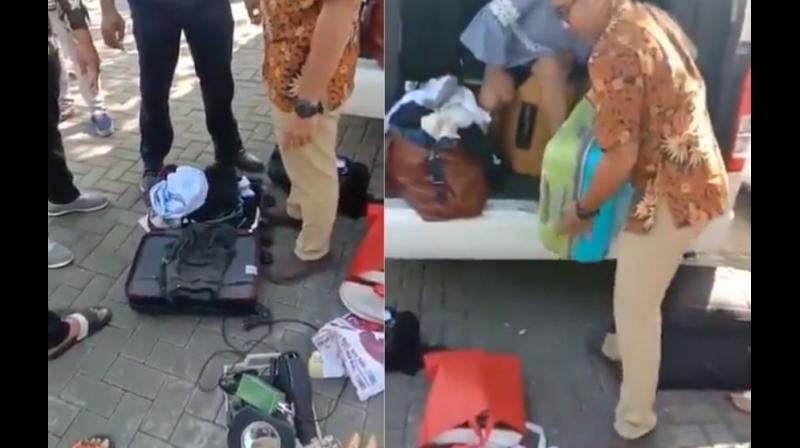 In the video, a woman can be seen arguing with the officials from the hotel who seem to be vigorously going through the suitcases. (Photo: screengrab/ Twitter)

Mumbai: A video of an Indian family getting busted for stealing accessories from a hotel in Bali has now gone viral on social media. A two minutes 20 seconds long video shows one of the hotel staff scanning the family's luggage as they were on their way out from the hotel.

In the video, a woman can be seen arguing with the officials from the hotel who seem to be vigorously going through the suitcases. The family had allegedly "stolen" whatever they could get their hands on - which included mirror, hanger, artifacts, soap dispenser, and hairdryer, electronics, towels and so on.

She repeatedly asked the officials to let them go since they had a flight to catch. She even offers to pay for the stuff they'd stolen. A man also can be heard pleading to not call the police and saying, "I will pay.” However, the hotel officials refuse to accept payment.

The video sparked an outrage among people with many criticising the family for shaming India abroad. Here’s how people reacted, including actress Mini Mathur.

The worst example of entitled indian travellers who are a disgrace to the image of our country. Casually stealing hand washes, room artefacts, hair dryers from a hotel room in Bali. And the uncle pawing the hotel person at the end is just 🤮 pic.twitter.com/UONwWCKmUq

I would not be surprised if soon AirBnB landlords start refusing Indian guests. Our reputation is taking a severe beating.

This is exactly the reason why Indian railways had the foresight to attach a toilet mug to a chain.

But there is still theft of blankets and pillows taking place.@acjoshi knows best.

True - there should be a mark made by foreign officials in such passport & once they enter India, cancel the passport in the immigration & never give them one for next 25yrs ...

Just a few days back, business tycoon Harsh Goenka took to Twitter to share a notice he came across a hotel in Switzerland. It was specially addressed to Indian travellers and asked them to follow certain rules.

Reading this notice I felt angry, humiliated and wanted to protest.
But a realisation dawned that we as tourists are loud, rude, not culturally sensitive. With India becoming an international power, our tourists are our best global ambassadors. Let’s work on changing our image! pic.twitter.com/7R4ZrZIXKi