The 61-year-old leader was the minister for home affairs, law, parliamentary affairs and legislature in Mr Yediyurappa’s cabinet 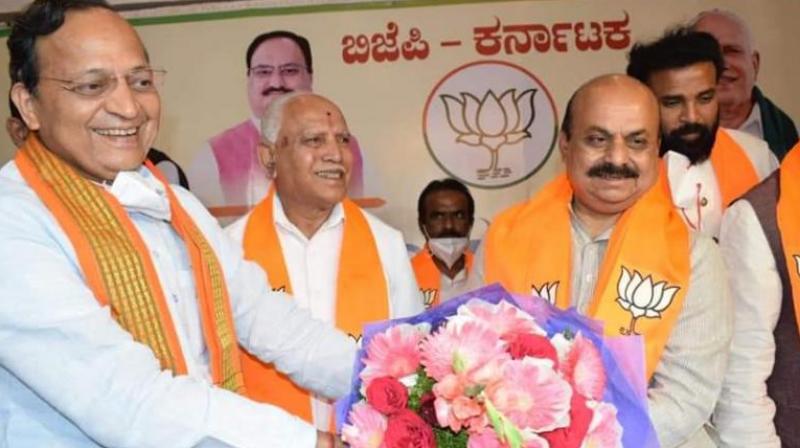 New Delhi/Bengaluru: Lingayat leader Basavraj Bommai was Tuesday elected as the successor of Lingayat strongman B.S. Yediyurappa as the new Karnataka chief minister, with the BJP legislature party formally electing him as its new leader. He will take the oath of office at Raj Bhavan in Bengaluru at 11 am on Wednesday. Sources said there was the “clear stamp” of Mr B.S. Yediyurappa on this succession plan.

The new CM is the son of former chief minister S.R. Bommai. The 61-year-old leader was the minister for home affairs, law, parliamentary affairs and legislature in Mr Yediyurappa’s council of ministers, which was dissolved on Monday.

“The new leader’s name was proposed by the outgoing CM and endorsed by Govind Karjol, R. Ashok, K.S. Eshwarappa, B. Sriramulu, S.T. Somashekar and Poornima Srinivas,” the BJP’s central observer, Union minister Dharmendra Pradhan, said after the meeting. Soon after the announcement, Mr Bommai sought the blessings of Mr Yediyurappa, who he described as his “political guru”, and was greeted by other party leaders.

The legislature party meeting to elect the new leader took place at a city hotel in the presence of Mr Pradhan and the other central observer, Mr G. Kishan Reddy. It was attended by BJP general secretary in charge of Karnataka, Arun Singh, state chief Nalin Kumar Kateel and national general secretary C.T. Ravi, among others. Known for his “clean and non-controversial” image, Mr Bommai is considered among the close confidants of Mr Yediyurappa.

Ending months of speculation over his exit, Mr Yediyurappa on Monday stepped down as chief minister as his government completed two years in office. Karnataka governor Thaawarchand Gehlot accepted the 78-year-old BJP veteran leader’s resignation and dissolved the council of ministers that he headed.

As the son of the late S.R. Bommai, this is the second case of a father-son duo becoming CM of Karnataka, after H.D. Deve Gowda and H.D. Kumaraswamy.
Soon after his election as leader of the BJP legislature party, Mr Bommai along with Mr Yediyurappa drove to Raj Bhavan to stake claim to forming the government. Thanking Prime Minister Narendra Modi, home minister Amit Shah, BJP president J.P. Nadda and the members of the BJP parliamentary board, Mr Bommai said the legislature party had unanimously elected him as its leader and Mr Yediyurappa had blessed him by proposing his name.

“The trust and expectations that the people have in the BJP, also the expectations of a pro-people administration to take Karnataka forward in all sectors -- that our leaders PM Modi, Shah and Yediyurappa have -- I will strive for it,” he said, thanking all party leaders and legislators.