India   All India  28 Jul 2021  Blinken arrives in India; to discuss plethora of issues with Indian leaders
India, All India

Blinken arrives in India; to discuss plethora of issues with Indian leaders 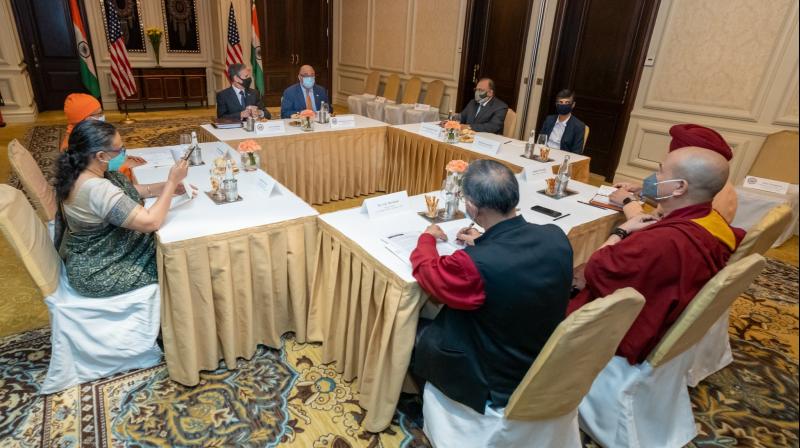 US Secretary of State Antony Blinken in a meeting with civil society leaders. (Photo: Twitter/@SecBlinken)

New Delhi: US Secretary of State Antony Blinken arrived here on Tuesday on a two-day maiden visit to expand the strong and growing bilateral partnership with the Biden administration describing India as a "leading global power and a key US partner" in the Indo-Pacific and beyond.

In a clear reflection of Washington's position towards certain Chinese actions, US Defence Secretary Lloyd Austin talked about China's "unwillingness" to resolve disputes peacefully as well as "aggression against India", in an apparent reference to the eastern Ladakh standoff.

Separately, in a fact sheet, the US State Department said the US supports India's emergence as a leading global power and vital partner in efforts to ensure that the Indo-Pacific is a region of peace, stability, and growing prosperity and economic inclusion.

"Unfortunately, Beijing's unwillingness to resolve disputes peacefully and respect the rule of law isn't just occurring on the water," Austin said at the International Institute for Strategic Studies in Singapore.

"We have also seen aggression against India destabilising military activity and other forms of coercion against the people of Taiwan...and genocide and crimes against humanity against Uyghur Muslims in Xinjiang," he said.

On Wednesday, Blinken and Indian leaders will discuss a plethora of pressing issues such as the fluid situation in Afghanistan, regional security concerns, COVID-19 response and ways to boost Indo-Pacific engagement, people familiar with the agenda of talks said.

"India is a leading global power and a key U.S. partner in the Indo-Pacific and beyond," the US State Department said in the fact sheet which was shared with reporters by the US embassy here.

"A partnership anchored in shared values, mutual interests and goodwill. Welcome to US Secretary of State @SecBlinken on his arrival in Delhi," External Affairs Ministry Spokesperson Arindam Bagchi tweeted.

On Wednesday, Blinken will hold extensive talks with External Affairs Minister S Jaishankar and meet National Security Advisor Ajit Doval. He will also call on Prime Minister Narendra Modi before leaving for Kuwait as part of his two-nation tour.

".@SecBlinken is wheels down in New Delhi for meetings with our Indian partners. We're excited to expand the strong and growing #USIndia partnership," US State Department spokesperson Ned Price said on Twitter.

The US State Department said Blinken is visiting India to reaffirm the United States' commitment to strengthening the partnership and underscore cooperation on shared priorities.

This is Blinken's first visit to India after assuming charge as the US Secretary of State and the third by a high-ranking Biden administration official after visits to New Delhi by Defence Secretary Lloyd Austin in March and Special Envoy on Climate Change John Kerry in April.

According to a media advisory released by the Ministry of External Affairs, Blinken will be in Delhi for a little over 20 hours. His meeting with Jaishankar is scheduled to begin at 12 pm and he will call on Prime Minister Modi at 4:30 pm. Blinken is scheduled to emplane from Delhi at 5:30 PM.

Just before leaving for India, Blinken said he was looking forward to consultations with partners of the US for further cooperation in support of its shared interests in the Indo-Pacific and Middle East.

"Wheels up for my trip to New Delhi and Kuwait City. I look forward to consultations with our partners to further cooperation in support of our shared interests in the Indo-Pacific and Middle East," he tweeted.

It is learnt that situation in Afghanistan, expansion of cooperation under Quad, regional security concerns in the wake of China's aggressive behaviour and issues relating to the Indo-Pacific will dominate the talks.

People familiar with the agenda of the visit said both sides will extensively deliberate on the deteriorating security situation in Afghanistan with the Taliban increasing its hostilities in an attempt to seize control of new areas in the country.

Afghanistan witnessed a series of terror attacks in the last few weeks as the US withdrew the majority of its troops and is looking at completing the drawdown by August 31, ending nearly two-decade of its military presence in the country.

In the talks, the Indian side is expected to raise the implications of the withdrawal of American troops from Afghanistan and the need for sustained pressure on Pakistan on terror financing and terrorist safe havens.

"The United States and India are also closely coordinating on regional security issues, such as Afghanistan," the State Department said.

In the talks, both sides are also expected to explore ways to deepen defence collaboration, including exercises, defence transfers and technologies ahead of the next edition of the 2+2 defence and foreign ministerial dialogue to be held in the US later this year.

"US-India defence cooperation is reaching new heights, including through information sharing, liaison officers, increasingly complex exercises like Malabar, and defence enabling agreements, such as the secure communications agreement COMCASA," the State Department said in the fact-sheet under a sub-heading "Deterring Our Adversaries and Defending Our Interests".

"As of 2020, the United States has authorised over USD 20 billion in defence sales to India. Through the US-India Defense Technology and Trade Initiative, the United States and India work together on co-production and co-development of defence equipment," it said.

The two sides signed COMCASA (Communications Compatibility and Security Agreement) in 2018 that provides for interoperability between the two militaries and provides for the sale of high-end technology from the US to India.

In the talks, India and the US are also expected to look at implementing the Quad vaccine initiative.

On coronavirus pandemic, it said the US and India are partnering to strengthen the global response to COVID-19 and on issues ranging from addressing infectious disease outbreaks to strengthening health systems to securing global supply chains.

"US pharmaceutical companies have coordinated with Indian companies since the beginning of the pandemic. This cooperation includes voluntary licensing and technology transfer agreements to increase global manufacturing capacity," it said.

In his address, Austin said Beijing's claim to the vast majority of the South China Sea has no basis in international law.

"That assertion treads on the sovereignty of states in the region. We continue to support the region's coastal states in upholding their rights under international law. And we remain committed to the treaty obligations that we have to Japan in the Senkaku Islands and to the Philippines in the South China Sea," he said.

Referring to COVID-19, he said when India was besieged, its friends stepped up.

In the talks, India and the US are also likely to focus on ways to augment trade and investment ties besides looking at opportunities in healthcare, education, digital domains.

After arriving in India, Blinken tweeted that he spoke to Nepal's Prime Minister Sher Bahadur Deuba and discussed the advancement of the US-Nepal partnership including cooperation on the shared fight against COVID-19 and the effects of climate change.